FIRST PUBLISHED MARCH 2012. SOME LINKS MAY NOT WORK. 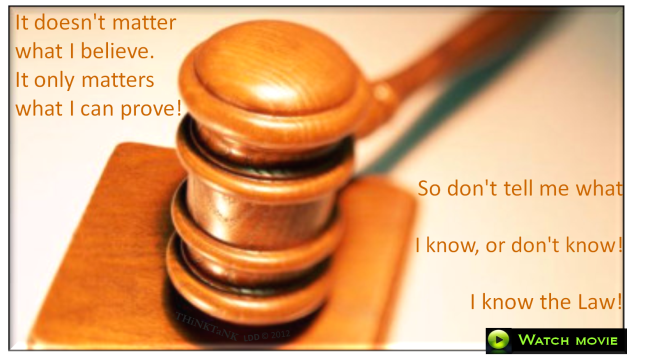 To answer my own question: No. There's more to lawyers, and not only do I personally

like and welcome fresh and good lawyer jokes but also it's important to understand:

Iawyers really do come in different flavors. Not all are 'married' to legal practice.

Not all want to bamboozle, hoodwink and sue you while you are down & filing

for bankruptcy. And certainly, not all thrive in the profession because like it

or not, there's a certain structure (to be discussed in a subsequent blog).

Nevertheless, this blog fulfills a promise made to certain loved ones.

We won't get into the details. But suffice it to say, I thoroughly

ment of the subject, which if memory serves me right

was first published in April 2004, after I left my 2nd

in China. My original hardcopy of the Legal

has red ink all over the article, ori-

aren't normal. And the fol-

excerpts is for you.

...Lawyers are odd. For a start, they are highly intelligent. Compared to the average person in the room they are as clever as a barrel load of monkeys.

Common sense suggests that 'personality' probably has something to do with it too, but just as common sense also suggests that 'many hands make light work' and 'too many cooks spoil the broth' it is possible to construct all manner of appealing but contradictory 'psychological profiles' of the perfect lawyer. For example, a successful lawyer has to focus and concentrate on important little details — characteristics classically associated with an "introverted" personality type. But they also need to be expressive and eloquent advocates if they are to persuade other people around to their point of view. [Relevant blog] That goes with 'extroversion', and the complete opposite end of the scale. So the word 'chameleon' starts to come to mind...

Remember, it is important to note that just because lawyers seem different from the general population it does not necessarily follow that law firms seek this out. 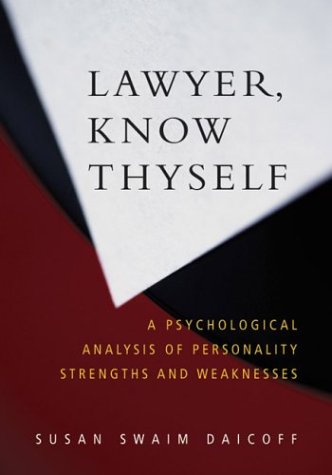 [image hyperlinked] has been collecting data on lawyers' personalities for many years. Daicoff has Masters degrees in both law and clinical psychology, and according to her research, lawyers are different from 'normal' people in several ways.

Firstly, lawyers have a high need for achievement. They also score highly on measures of competitiveness, masculinity, argumentativeness, aggression and dominance. Compared to the general (US) public, they are more cold and quarrelsome, and less warm and agreeable. To address the problem of cause and effect (are corporate litigators quarrelsome and pedantic by nature, or do they just seem that way because it goes with the job?) Daicoff has data to suggest that some of these characteristics begin to manifest themselves in lawyers' childhoods, or may even have a biological basis. Levels of the male hormone, testosterone, are for example, higher in lawyers than they are in the general population (and yes, this goes for female lawyers too).

Next, lawyers have a disproportionate preference for 'THiNKiNG' versus 'Feeling' — a distinction derived from Jungian psychology. People with a THiNKiNG preference tend to make decisions in a detached, objective and logical manner, and make a conscious effort not to let their personal values get in the way of making a 'right' decision. A Feeling preference, on the other hand, is associated with making decisions on a more personal, subjective and values-driven basis.

While 'THiNKERS' might actually look forward to a good argument, 'Feelers' are uncomfortable with conflict, seek and promote harmony, and enjoy opportunities to help people. As a THiNKiNG type myself, it makes absolute sense to me that lawyers have a tendency to be coldly logical...

Now, one of the central tenets of 'type theory' is that preferences and abilities are not the same thing — someone can still be very effective "working against their type". This is only 'bad' in the sense that it can be tiring for the individual concerned, hence the hugely introverted and very successful barrister...who is electric in court but who has to retire to his rooms to recover after every ''performance"...So successful lawyers may be different from the average person, but there are many different types of personalities successfully practicing law.

The THiNKiNG and Feeling preference is usually measured using a device called the Myers Briggs Type Indicator (MBTI). The MBTI can also be used to measure the 'Extroversion versus Introversion' and the 'Sensing' (versus 'Intuition') mentioned earlier...as as something called 'Judging' versus 'Perceiving' (a preference for an orderly, structured approach to things in general, versus a more flexible, spontaneous approach). The poles in each pair of preferences are mutually exclusive, so someone's MBTI 'type' is a combination of four letters that denotes their particular set of preferences — for example 'ISJT' stands for Introverted, Sensing, Thinking, Judging type. ISJTs are particularly logical and analytical, and while they are quite fair and 'reasonable' in their dealings with other people, they are often somewhat detached and intimidating.

ISJTs are the most common type among lawyers, according to research conducted by Lawrence Richard, of US-based legal consultants Altman Weil...this does not mean that ISJTs necessarily make the best lawyers, or even that other types might not find the law as enjoyable or as profitable a career. Even in the Altman Weil study, over 82% of successful lawyers were not ISJTs and nearly 4% were the polar opposite — ENFPs, those warm-hearted, outgoing, intuitive who like to leave everything to the last minute.

Research shows that lawyers need to be more conscientious and hard working than most...Research also shows that lawyers tend to have a higher incidence of alcohol and substance abuse...law firms expect their trainees to be themselves, but to stand out a little from the crowd; to be positive about the choices they have made, and to be comfortable in their own skins.