Range control is why and how the late Emanuel Steward successfully transformed the Klitschko brothers, particularly, the glass-jawed Wladimir Klitschko, into the Heavyweight division's untouchables. And why RingMagazine, Boxing's hype machine — the guys who for a long time knew Pacquiao was NOT Pound for Pound #1, 2 or on Mayweather's level yet — toyed with dolts willing to believe otherwise. To understand WHY those who know their boxing understood that Pacquiao stood no chance on May 2, click here. To find Wilson's channel, click here.

Tyson can deliver your vitriolic KO against Mayweather. But does it mean he's smart?

You could be forgiven for getting this from the BBC: “Tyson believes Mayweather stands alone at the forefront of boxing: "He controlled the fight, he has great endurance, he did a really good job. "It's his era, his time. He is in invincible mode now - no-one can stand with him at this particular moment.” Then scratching your head after seeing Tyson go off on attacks against Mayweather, against whom he was not only rooting long before May 2, 2015 but using Boxing sense to predict an outcome he ended up being totally wrong about.

Evidence via Youtube and Google is legion. And whatever the source of Tyson's intense dislike for Mayweather whom he referred to as “dirt” — be it a clash of egos or insecurities regarding protection of a legacy of domination — one sees a pattern. A pattern that engulfs not only “The Great” three-time heavyweight champion, Muhammad Ali (nothing wrong with the old champ rooting for Pacquiao), but his accomplished daughter Laili Ali's well-publicized personal attacks on Mayweather. 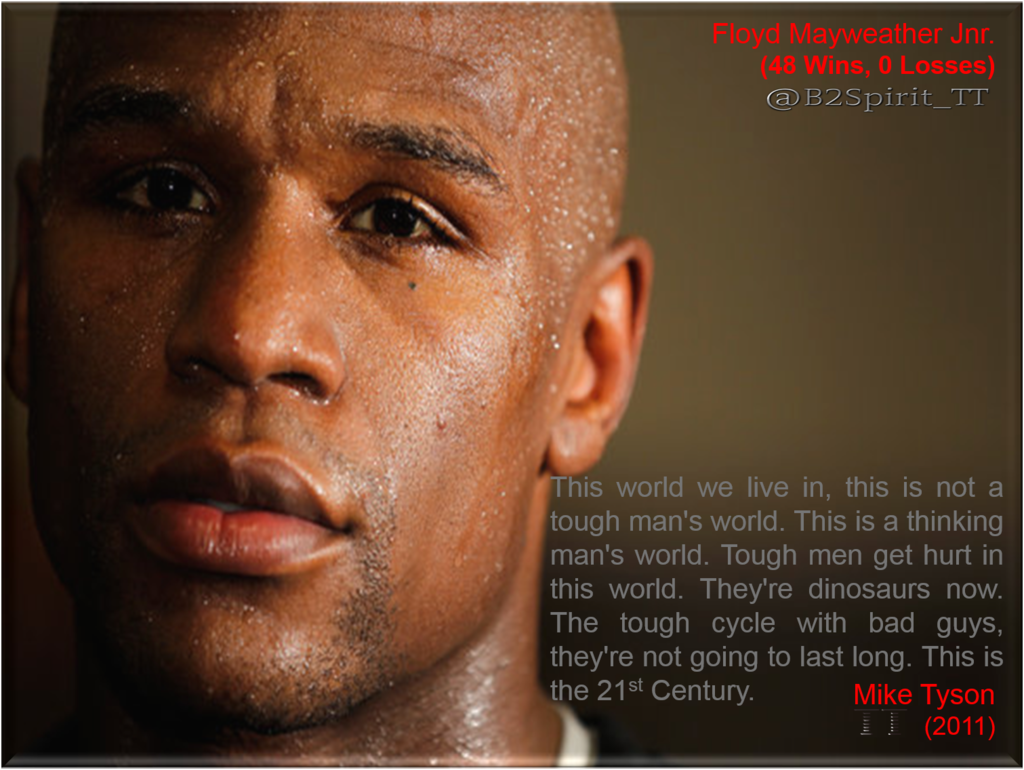 I thought Tyson's Boxing IQ had finally matured when he essentially simplified the linchpin of the so-called “Mayvinci Code” of Boxing. The one Freddie Roach mocked. The same Mike Tyson who famously said “Everybody has a plan until they get punched in the face” — precisely what happened to Pacquiao in Round 1 — said the above. The same Tyson who has recently been encouraging Boxers to switch to the MMA/UFC because it's more exciting. Disingenuity.

Oh, don't bother asking him who is the PPV king. Or why if Manny Pacquiao is so much more exciting, his last fight before May 2 only got some 320 PPV buys. He won't be able to give you a consistent answer either as he'd rather latch on to Mayweather's “delusional” claim to greatness, now being exploited like a city center cash machine by mass media the world over. But whatever a hater thinks, the mindset and mental fortitude of a true winner is uncompromisingly simple and Virgil encapsulates it: “They are able because they THiNK they are able.”

That's why they show up and win. Without excuses. The same reason I concede Floyd Mayweather Jnr., given all he has achieved, is well within his rights to declare: “Nobody will ever brainwash me to make me believe Muhammad Ali is better than me.” A point that the likes of Light and Welterweight king Terence Crawford, the legendary Bernard Hopkins and the BBC have affirmed. So, just because thousands who lack Boxing IQ (the same thing Manny Pacquiao needed in order to beat Mayweather), don't understand range control and call the defensive boxing clinch “hugs and kisses” are retweeting Mike Tyson and Oscar De La Hoya's disingenuous views, doesn't make Mayweather a boring fighter, nor Pacquiao a people's champion.

As early as 2008, Floyd Mayweather Jnr, called the May 2nd fight exactly as it played out saying he'd make easy work of Pacquiao because of his (now vanquished) foe's style being tailor-made for him. A few months ago, I noticed Amir Khan being much more specific (in interviews like this one) about how technically boring and one-sided it'd be en-route a UD for Mayweather. But the one who emerged most compelling (Mayweather aside) was two-time world champion and current SHOWTIME analyst Paulie Malignaggi's pre, and post-fight analyses:

Sugar Ray Leonard agreed there should be no excuses after May 2nd. So did Manny Pacquiao's own trainer Freddie Roach. And many more you can find via Youtube, on tape. Including Paulie Malignaggi, again. What is telling is that you'll find most of such predictions and analyses like the above dwarfed in viewership by silly, made-up news like this one. Called “Pactards” by Boxing purists for their juvenile antics and bizarre preference for gay name calling (gayweather, etc.), such casual “boxing fans” create and shamelessly live in a silo aimed at attracting and catering to groupthink, conspiracy theory and gushing speculation. And when they cite facts, its always from obscure, and often very extreme sources. Small-minded people don't like to be challenged by the truth. And that's why even HBO's Max Kellerman — not exactly a Mayweather fan — came under attack by them for openly challenging Pacquiao's delusional assertions of having won. Driven by emotion and an alterverse of their own making rather than logic, small-minded fanatics ignored the genius of a supremely gifted Mayweather (online, 47-0 fights) for any curious minds to study. Then called the results following a clash with his 48th victim, boring. Because having immersed themselves with faux news for years, their idol (God-loving and never disingenuous Manny Pacquiao) was either going to win, or else: “Boxing is dead.” That, and more silly conspiracy theories. And it made no difference how many experts told them that even on a good day, their idol was unlikely to beat Floyd Mayweather Jnr. the “sinner” who despite being God-loving, few know; plagued with injuries in the past, rotator cuffs or not, is mocked for his “brittle hands”.

Any honest person aware of the amount of bashing and hatred Floyd Mayweather Jnr. has to put up with would admit this much: NOBODY would be giving Mayweather any pass if he'd lost on May 2 2015 and attempted citing all the excuses coming from Team Pacquiao.

Secondly, whether or not Manny Pacquiao is in fact a good man, I don't know. But as a lawyer and Christian, I know God works through so-called “sinners”. Sometimes preferring to use them to do His good work. And that's where Floyd Mayweather comes in. The boxing world, practically since its inception, has always attracted slimy characters. That's why I found it curious that Roach, despite all his credibility problems (google “Joke Coach Roach”), characterized the May 2 fight as being good against evil. Freddie Roach might want to look up Galatians 6:7. For Manny Pacquiao, who didn't show up, underperformed and yet found it impossible to concede defeat, Galatians 6:3 is a good place to begin. Even better, I recommend 4 Spiritual Lessons from the Mayweather-Pacquiao Fight which I serendipitously discovered after initially publishing this article.

Thirdly, for Pac fans who have gone on record shamelessly admitting how bitter and hateful they feel towards Mayweather: God usually doesn't let such camps win. Except for divine reason beyond human comprehension. And in that sense alone, haters would have won on May 2, 2015. And we should be glad they didn't. Because the world has enough of that already.

Moreover, even the BBC repeatedly called Roach disingenuous for good reason. Click his image above to watch him declare there'd be no excuses before the fight. And while discussion of the infamous Bob Arum warrants an entire book, there are those who believe #MayweatherPacquiao took as long to materialize not only because of the PED issue/cloud, but also, based on a strategy of waiting out Mayweather (to age, slow down and become beatable). Speaking of which, Paulie Malignaggi also argues: “My opinion is very educated...The drug-tested Pacquiao wasn't explosive, wasn't very scary...You see it when they (drug) tested him he hasn't looked so sensational (in his subsequent fights)...The guy blatantly refused random drug testing over needles...Think about it. He threw $50 million dollars out the window for not liking needles (in 2009) and now he's complaining he wasn't allowed to get a needle (for a shot of lidocaine and other anti-inflammatories in the dressing room) before fighting Floyd Mayweather on May 2 (to treat his shoulder).” Needless to say, in the end the better fighter outclassed and froze the hopes of ardent haters the world over, for all the reasons those who know their boxing have, and continue to cite. And that includes Serafim Todorov, —the last man to beat Floyd Mayweather Jnr. Who despite languishing in poverty and obscurity, has, and shows more grace than Manny Pacquiao the saint and “people's champion.”

Ignorance is now in vogue. Commentary is now news. So, expect more stupidity from those who have always failed to understand, and likely, never will, that:

Commentary was NEVER news. But sadly, we live in a Social Media era where every uninformed netizen with an attitude and sense of entitlement really believe they know what they're talking about. Where confusing commentary/entertainment with real news has idiotized many who believe they understand Boxing. Thanks in large part to bad journalism. CNN meanwhile, has been suppressing and/or ignoring positive Mayweather news while sensationalizing his flaws and legal troubles (while ignoring Pacquiao's) until the May 2 bout. A trend I'd been quietly observing for years.

Somebody at CNN even paid Steve Almasy to add to media-induced Boxing ignorance by writing: “People also are mad because not much happened in the ring, but both fighters are getting a serious amount of coin. Some media broke it down by the second, but think of it this way; Pacquiao took in about $1.4 million per punch landed. Or check this out, Mayweather made more ambling across the ring at the beginning of each round than most people pay for a house. After the bout, he showed two ESPN announcers an initial payment check — and there will be another after the pay-per-view sales are figured out — that had a 1 and eight zeroes. I thought only Mega Millions and Powerball wrote checksthat big.” Somewhere in the same article, unless it's been edited, I saw “kinda”. So, People's Champ #FoxNewsFacts attitudes aside, why would a Boxing great who knows, perfects his craft and comes to win care that he's reviled while the other guy is busy being everything to everybody?

I wouldn't. Nor could I have put it any better myself:

“If you're paying to watch me lose, keep paying...Bad press, good press, bad stories, good stories, it doesn't really matter what you write about me. Just write about me.” Says Mayweather, who embodies Jim Rohn's saying: “An enterprising person is one who sees opportunity in all areas of life.” Because in the end, he had the last laugh. Or as one obviously bright commenter (Ashley Grant) suggested: “Love him or hate him, this guy is winning the game we call life. He will retire young, with a boatload of money, and all his senses intact. [So, should you] find yourself disliking another man for this, may I suggest a little self reflection. IMHO.”