Jokes aside, people — mostly rubes who are bloodthirsty and or sore because the person they were rooting for was outclassed by the man they revile — have been drawing “smartass” $100-related contrasts since #CaneloKirkland (May 9, 2015). It was the first scintillating bout since the lopsided #MayweatherPacquiao (May 2, 2015).

As I tweeted, one was Boxing made easy. The other, which ended with a brutal 3rd round KO, suits the bloodthirsty with short attention span, (Youtube/Social Media) racist trolls and nationalists alike who don't understand that boxing is about hitting while taking as little punishment as possible. But never attempt telling the “Boxing is dead” rubes who don't understand that Manny Pacquiao never belonged in the same ring with Floyd Mayweather Jnr. to begin with (hence the mismatch), that. Just let them keep believing the hype they're fed despite past scandals serving as sufficient warning. Just know that Boxing's state, vis-à-vis its exaggerated and repeated demise, is the victim of ignorance.

When it comes to the Art and Sweet Science of Boxing, there are those who know their boxing. Like Floyd Mayweather Snr. who together with others mentioned further below, correctly predicted: “To be honest with you, it’s not going to be much of a fight.” Then, there're professional, even accomplished boxers, boxing Hall of Famers and future Hall of Famers who DON'T KNOW their boxing. Don't worry. I explain that at No.5 through Part 2.

Floyd Mayweather Jnr's uncle and longtime trainer Roger Mayweather (“Uncle Roger”) — parodied above by comedian Kevin Hart — often repeats: “Most people don't know sh★t about Boxing” for the same reason he says: “Boxing is a thinking man’s game.” And the fallout, vitriol and daft “Boxing is dead” chants on Social Media following Floyd Mayweather's domination of Manny Pacquiao is due to ignorance about what Boxing is. And in particular, in the case of #MayweatherPacquiao, range control. So let's review Mayweather vs. Pacquiao. First 4, by ESPN [explanatory notes by THiNKTaNK]:

Mayweather is the best of his era

You don’t have to like him — and the buildup to Saturday’s “Fight of the Century” spent a great deal of time focusing on that narrative — but Mayweather (48-0, 26 KOs) proved over 12 rounds why he’s the best boxer of his day. In a fight that would undoubtedly go a long way toward putting a bonnet on the legacies of both, Mayweather showcased why he has no peers as a craftsman and technician of the sweet science. He controlled pace and distance throughout the second half of the fight and repeatedly caught Pacquiao (57-6-2, 38 KOs) on his way in with clean right hands. Mayweather, 38, also utilized a stiff jab strategically to reset himself and detour Pacquiao’s momentum. Mayweather made the 36-year-old Pacquiao look like an ordinary fighter over the last six rounds and that fact alone speaks of his greatness.

The fight failed to live up to expectations

But that’s by design. Let’s not forget, Mayweather is a boxer in the purest sense of the word and not a fighter. He has also proved to be boxing’s greatest businessman. But for the majority of his career — and it's one of the secrets to his longevity — he has mostly avoided having to be a fighter. Anyone expecting a fight against Pacquiao was soundly disappointed outside of a few brief skirmishes in the early rounds. Mayweather’s plan is to suck the excitement out of every fight with his brilliant defensive style, and he executed his game plan to near perfection. As the fight rolled on, Pacquiao’s output decreased because Mayweather tagged him with accurate potshots.

Pacquiao had no plan B or C

The PacMan never tried for the knockout, a surprise to anyone expecting a close fight or a Pacquiao victory. After the fight, Pacquiao explained his somewhat passive approach in the final two rounds by saying he believed he was comfortably ahead. But the reason he wasn’t ahead was that he never made an adjustment once Mayweather was able to take away his overhand left in the middle rounds. Pacquiao did a good job of cutting off the ring early and was able to corner Mayweather at times in the second half of the fight. But he was never able to keep him there, and that proved to be the difference. Outside of a left hand that briefly staggered Mayweather into the ropes in Round 4, Floyd was never in visible trouble again. While most of that credit goes to Mayweather, we never saw an adjustment or variation to Pacquiao’s style of straight-ahead attacking. [Robert Garcia the celebrated trainer of #MayweatherMaidana I & II offers in-depth analysis. VIDEO here. Plus, Maidana himself correctly predicted the outcome.]

Mayweather has no problem with southpaws

For all of the talk of Pacquiao’s hand and foot speed, and the awkwardness to his style as a southpaw, Mayweather stood his ground well during Pacquiao’s moments of success early and had little trouble adjusting. Any issues Mayweather had in brief pockets earlier in his career against lefties DeMarcus Corley or Zab Judah (who both, not coincidentally, served as Mayweather's sparring partners) were not duplicated against Pacquiao. Along with establishing his jab — which isn’t common for an orthodox fighter against a southpaw — Mayweather won the fight with efficiency. More than half of Mayweather’s punches were power shots and he landed 48 percent of them, according to CompuBox. He also limited Pacquiao to just 19 percent efficiency overall. Yet, despite Floyd’s incredible efficiency, he also took away any avenue for Pacquiao — who drew loud cheers from the crowd for any flurry he missed or landed — to influence the judges based on activity alone. In fact, Mayweather threw more punches than Pacquiao (435 to 429), which very few would have expected.

De La Hoya is like Sen. John McCain and his opinions: Ubiquitous. But often wrong. 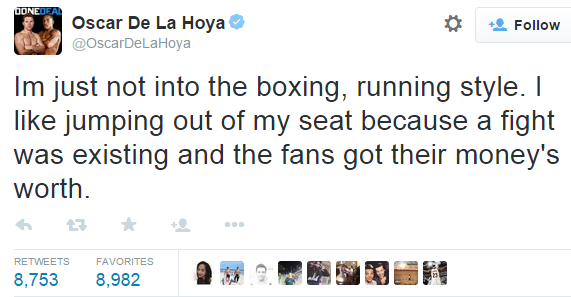 Well-informed Boxing fans know the Golden Boy has been a sore loser since his Split Decision loss to Floyd Mayweather Jnr. And for several years since, he has consistently picked the loser to win against Mayweather. Why people take his Boxing acumen seriously is frankly beyond me.

He famously lost ALL his biggest fights. Beaten by Félix Trinidad. Beaten twice by “Sugar” Shane Mosley. Then, by the legendary Bernard Hopkins who felled him with a smart liver shot; Floyd Mayweather, Jnr., as well as Manny Pacquiao, who made him quit on his stool. Yet, as a Boxing promoter, he keeps selling the rather dubious idea of a “blueprint” that beats Mayweather that he's been passing on. Even I was momentarily sold pre-Victor Ortiz. But I won't waste precious time providing links of interviews (intelligent readers can locate themselves via Google and Youtube) he gave predicting a resounding win or knockout by Manny Pacquiao. Miguel Cotto and even Evander Holyfield included.

As mentioned before, there are boxers, even Hall of Famers and future Hall of Famers who DON'T KNOW their boxing. And Oscar De La Hoya is a good example.

Counterintuitive? I know. Let it marinate for a bit...

When Ready To Proceed, Click On White Dove Below... 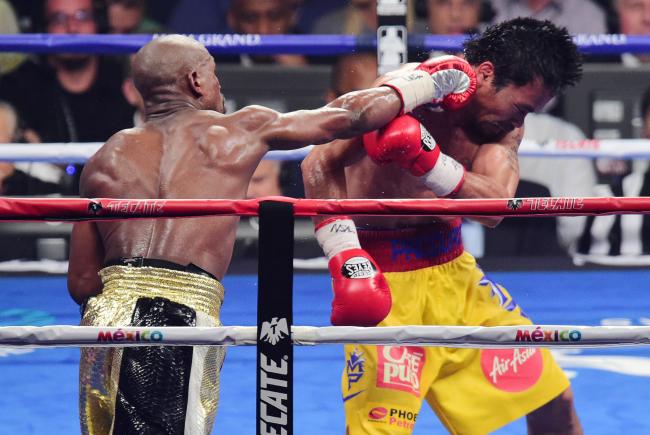