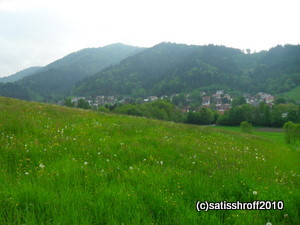 In the middle a small house,


So wonderful this piece of earth,

This old Heimat song from Schlesien was painted and hung on the stairs of Frau Ana Podolski in Kappel by her dear husband when I visited her. We’d had a chat outside her house where her late husband had
done a mural on the side wall of the house. When you drive or walk to Kappel
you can’t miss it: a big painting depicting a giant called the Rübenzahl,
holding a carrot and near his feet is an old Schlesien town with its church. In
the distance you can discern the Schneekoppe, which is a 1603m high mountain.

Ana said, ‘It is a German mountain with alpine character. Below the peak you can see a Wetterwarte, a small building to forcast the weather.’

Frau Ana Podolski was born in Hiddensee, Agnetendorf, and has gone through her share of separation from her old home during the war years and has now found a place she call home in Kappel. But the
longing (sehnsucht) remains. Rübezahl is a giant from the Riesengebirge, a
mountain spirit, and is the name of a person and place since the 13th
century. It might be noted that there are 13 Rübezahl stories in the Daemonologia
Rubenlii Silesii published in 1622 by Johannes Praetorius in 1662.
Rübenzagel is the name used in Schlesien like the words: zahl, zoal, zeul even
today.

Ana said, ‘In Norway then have a spirit called the Troll and in Schlesien we had our Rübezahl who is not only a Berggeist but also a magic word. The spirit helps the poor.’ Her home is filled with memories
of Schlesien. I asked Ana to tell me something about her late husband because
he seemed to be omnipresent in the house. He’d constructed and painted a lot of
beautiful and useful things which were on display in the house.

She smiled and said, ‘My husband was a painter but he also indulged in artistry. He could repair a lot of things. We had leave Schlesien in 1945 because Germany had lost the war that began in 1939 and
lasted till 1945. We also lost the territory till the Gorlitz-Neisse line. We
were evacuated to north Germany. The winter months of 1944-45 were extremely
cold and snowy, and many people migrated to the USA and Canada. What followed was
injustice towards us Germans.’

It was on Juli 14, 1945 between 6 to 9am that the evacuation of Germans began. The German population was brought to the area west of the river Neisse. Every German was allowed to carry a maximum of 20 kilos of luggage. Transports like
wagons, oxen, horses, cows were not allowed. The entire living and inanimate
objects had to be left behind and became the property of the Polish government.
Hirschberg became Yelemagora and Breslau was given the Polish name of Wronlaw.

We had to travel from Pommern, East Prussia across the east sea to Schleswig-Holstein because the Russians were coming. The people in the east part of Schlesien were trying to flee the onslaught of the
Russians. The German radio spoke of a wunderwaffe that Hitler’s Luftwaffe was
working on, but the living conditions declined with the passage of each day.
Towards the end of January we were kept awake by the artillery fire. The front
was coming closer to the Bunzlau, Liegnitz and Breslau, some 50 km north of Hirschberg.
Even old men had orders to fire at the enemy with the panzerfaust (bazookas) to
save the Vaterland.

A lot of people died in the East Sea and everything was confiscated by the Russian soldiers. We had to remain. My father died on February 1, 1943 in the home
military hospital. That was also the day when Stalingrad fell and lots of
German soldiers were missing. The Russians had won the battle.

My husband was a prisoner of war (p.o.w.) and had to construct bridges, work in the mines and elsewhere. He always sent his mother letters, who later had to flee from where she lived near Breslau.

Before he came home, my husband used to construct useful things with wood and the Russians discovered that he had talent so they took him to the Kremlin as a carpenter. He was six years in
Russia and he worked for Russians officers to help build their houses and
dachas.

Ana said, ‘ In order to avoid assassination, Stalin had three identical limousines with security- men. My husband was wounded on the left leg and that was why he was discharged from the p.o.w.
camp.

‘After he was released, he returned to his mother, and that was when I got to know him better and fell in love with him,’ she said with a twinkle in her eyes as we sat in her living room.


‘He got a job as a painter in the town council of Rerenau (Amt Oberkirchen). It’s called Auetal now. We had a lot of agriculture in those days an in the Ruhr area everything was destroyed. You
know, we were evacuated and weren’t
refugees,’ said Ana emphatically.

Ana Podolski folded her hands, which looked frail like parchment, the blue veins were distinctly visible on the backs of her fair, pigmented hands, as she said, ‘ We had no choice but to leave the
country in the years 1946-47. This was a decision made by the USA and the
Soviet Union with the signatures of the former enemy nations: Great Britain and
France. We had the Russian East Zone, the British and US West Zones and the
French Zone. The love for our dear hamlet and the whole of Schlesien has not
been minimised, even though we were forced to leave our beloved land. We
Schlesiens meet every two years in our old Heimat, and even the younger
generations share our sense of loss of Heimat and the pain that goes with it.’

Ana went further to say, ‘ I still think it’s important to tell people in the west about our odyssey from Schlesien. I have the impression the people still don’t know what happened to us in those days.’

It might be mentioned that Krommenau is an old settlement and was mentioned in 1305 in the bishop district circa Hyrsberc (Hirschberg) as the hamlet ‘Crupow.’ There was a coal mine, a small tavern with
fishery and a place for breakfast, complete with a tree, under the shade of
which the travellers could tie their horses. There was a nickel-mine in the
year 1373 on the Czeis hills. You can read about it in the city library of
Breslau. As time went by, the name of Crupow was changed to Cromnow, then
Krummenau, and in the end Krommenau. A rivulet called Krummseiffen flowed
through the hamlet. It was three km long before it became a tributary of the Altkemnitz. There was an elevation called Nebelberg, which means
‘Misty Mountain’ (698m). The founders of this settlement were 20 families where
agriculture was the main occupation. According to a certificate book, in the
year 1576 Krommenau had 25 farmers. The main religion (90%) was evangelism.
During the 30 Year War (1618-1648) the Christians had a tough time because in
1637 the Lutherian faith was forbidden, and as a result 578 evangelist churches
were closed.

The entire country was destroyed and was in penury. When the King of Prussia Friedrich II took over Schlesien in 1714, he declared freedom of religion for all. A big church was built but was misused by
the Poles as a store-room for hay, straw and cereals. The windows were closed
with nailed planks.

I asked her how she and her husband had landed in Kappel and not in north Germany.

Ana said, ‘ A cousin of my husband met a colleague from the Black Forest and she married him and settled down in Lenzkirch. My husband got a job at Knosp in the Moltke street. I was 14 years old when the World War II began and now I’m 70.’

« Stillborn » is the Monthly Release for February 2020. The piece is the second chapter of a composition called « Written In The Stars » which loosely tells ...
yesterday
0 Comments