We've already addressed fear. 3-part exposé via the feature image above (click/tap). Also, self-doubt, vulnerability, shame, failure, (failing wisely as opposed to unnecessarily), mockery and critically, how to not become a loser no matter how many rejections. Yet nothing beats mental strength.

Whatever the details of your office politics, that fair or unfair performance review, or any other adversity, strong mental health and fortitude includes a healthy ego that keeps you clear-headed.

People with an unhealthy ego are too often obsessed with their own opinions. So they easily crack and lose confidence when soundly challenged and defeated. A person with a healthy ego however, understands, as Bertrand Russell did: “Do not fear to be eccentric in opinion, for every opinion now accepted was once eccentric.” Their self-correcting attitude and growth mindset kicks in to say: 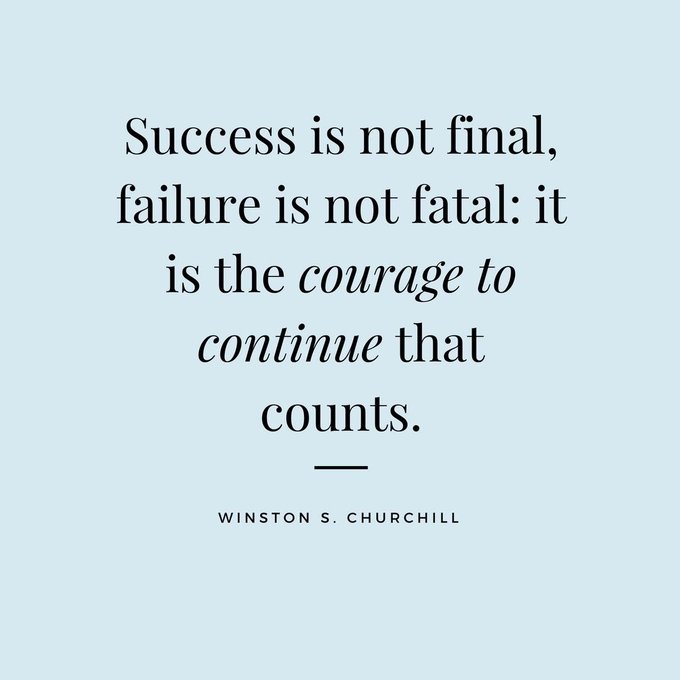 Sometimes, the solution is to stick around, engage, learn from people with divergent views, and grow. Other times, maturity and experience teaches you that it's time to escape and/or transcend stupidity. Indeed wherever you turn as you seek to realize your goals against seemingly insurmountable odds, the advice — regardless of the diction of celebrated winners (such as Oprah Winfrey) who like many others, beat the odds against her often — is unanimous:

I had a lot going against me.

There were absolutely no guarantees, and YES, I had my doubts. I even sucked.

But I was determined to push through discomfort, authentically making it right as I learned from (growth mindset) my failures. And why? Because... 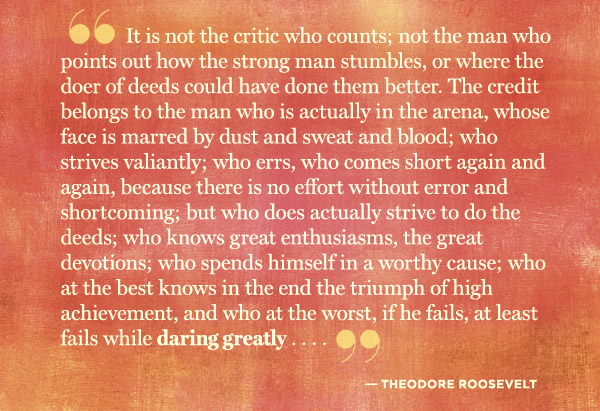 Some feedback will be disingenuous. All reviews, scores, judgment, and critics aren't created equal. But your main goal is to avoid adopting a victim mindset, and instead, know how to stay on-track.

Go to any grad school and ask around. You'll hear many interesting reasons why students left any number of careers or responsibilities behind to pursue their program of choice. But I'll never forget the Malaysian MSc. student who told me: “I wanted to get away from the environment. Too much office politics.” A band-aid fix, I thought.

Small-minded people, average people, see big thinkers and dreamers as a threat. And quickly recognizing them as the pint-sized people they truly are, despite any veil they wear, will save you time and energy, —if you heed Steve Harvey and Oprah Winfrey advice above. The reason I felt pity for the Malaysian grad student — who subsequently had interpersonal problems with me — is that self-righteousness isn't the answer. Nor is narcissism. Ask yourself: How trainable or receptive are you? Because while it's easy to focus on others, sometimes, we have some personal leadership work to do too.

Small-minded people avoid uncomfortable communication and conversations with others, which further exacerbates their insecurities. And even when in the same line of business or community as you nothing — except malicious motives, including a chip on their shoulder — stop them.

They avoid you. Communicate around you. Or behind your back.

No matter how many times you reach out to them in a spirit of friendship, they'd much rather communicate with others who similarly feel threatened by your goals, work ethic, integrity or imminent success. And you happen to be that kind of person, the only logical way to overcome your fear of failure is transcend negativity and other pint-size personality traits. Otherwise? why should others share their big dreams and pearls with you?

Small-minded people don't ask questions. They'd much rather assume, avoid you, or make up their own news and facts. Their threshold for tolerating inconvenient realities and (geopolitical) facts is so low that they discredit well-reputed and well-researched data or established journalism, news organizations (think the Associated Press, the BBC, Reuters, New York Times, NPR, CNN, CBS, ABC, NBC) and news items. Hence the humorous Twitter #FoxNewsFacts and faux news. 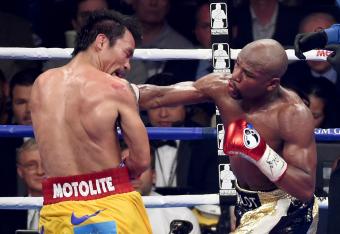 They create and shamelessly live in a silo aimed at attracting and catering to groupthink, conspiracy theory and gushing speculation. And when they site facts, its always from obscure, and often very extreme sources. Small-minded people don't like to be challenged by the truth either.

Driven by emotion and an alterverse of their own making rather than logic, small-minded folks ignore the genius of a supremely gifted boxer online (47-0) for any curious mind to study, and then call the results following a clash with the 48th victim, boring. Because having immersed themselves with faux news for years, their idol (God-loving and never disingenuous Manny Pacquiao) was either going to win, or else: “Boxing is dead.” And it made no difference how many experts told them that even on a good day, their idol was unlikely to beat Floyd Mayweather Jnr. the “sinner” who despite being God-loving, few know; plagued with injuries in the past, rotator cuffs or not, is mocked for his “brittle hands”. Yet, always shows up ready to out-smart every opponent, and wins.

Small-minded people (today in particular), go straight for the comment button/section, check who is liking or favoriting what; whether it's a buddy of theirs, rather than bother to read a feature article and synthesize it themselves. They don't appreciate quality content either. And so, happily celebrate meaningless content.

Following such a crowd won't enlighten you. That's why Benjamin Franklin aptly nailed their pettiness: “The learned fool writes his nonsense in better language, but 'tis still nonsense.”

They are ostensibly motivated by the disingenuous: Quantity and gimmicky content lacking real substance and value. Always about some social media wall. It doesn't matter whether it's fakebook, a board, a popularity list. Even if it's one that changes daily, and/or is manipulated. And below, a petty example by one site's 'useful idiot' shared with me by another former member who was repeatedly disgusted by similar antics and quit the now (I'm told) defunct site, shortly after I did. Winners aren't concerned with homepages. Whatever that is, to a small-minded person keeping score. Or metrics and manipulated pages. Winners are passionately obsessed with delivering value. And in my case, high quality content.

The mindset of a purpose-driven, self-assured innovative winner who isn't small-minded probably can't be summed up better than Erica Cook did: “I'm not interested in competing with anyone. I hope we ALL make it.”

You don't need the (negative) energy of small-minded folks who'd rather kill others' dreams because having given up on theirs, they are now on Social Media or some office corridor, cubicle, kitchen, or smoking space infecting others with their own self-doubt and fears — being bitter, conniving, gossiping — incapable of motivating positive, constructive colleagues through synergy.

Whatever your career or personal woes, only Advanced Personal Leadership (link to Vol. 2 below) will inoculate you from fear of failure, fuel your self-confidence, and set you up for success, and steering you away from the divisiveness, distraction, and indiscipline that overtime morph into bitterness and persistent failure. The hypertext and hyperlinked images are your guide.

So go create lasting bonds with the right influencers. Or, connect here. Because: 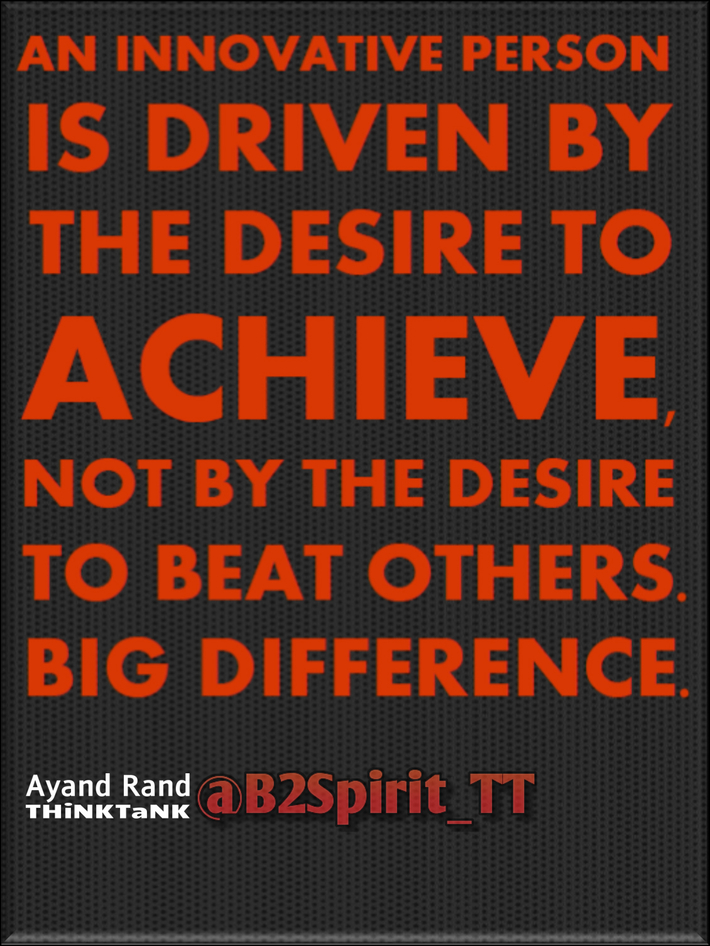