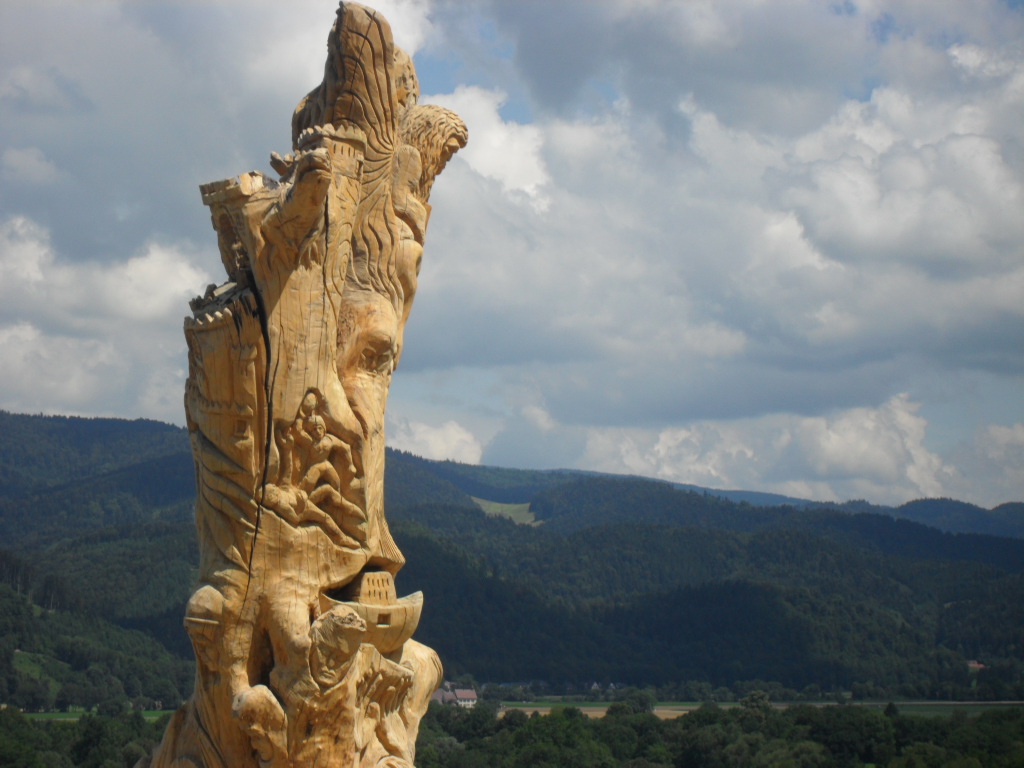 (Der Baum der Erkenntnis: a big sculpture on wood by Thomas Rees, located on Maiersberg,Kappel.His exhibits can be found in Freiburg-Kappel, Tessin (Switzerland), Günterstal and elsewhere).

Dr. Johann Faust, the man who sold his soul to the Devil. A mythical figure? Certainly not.

I went to the pretty town of Staufen via Bad Kroezingen from Freiburg. From the distance you can see the ruins of a castle looming above the vineyards on a hill. In the town below is a Gasthaus called Zum Lvwen (To the Lion). The tavern has a fresco on the wall by Prof. Fritz Geiges on the front wall depicting the Devil ' Mephistopheles in the process of breaking the neck of a broken down Dr. Faustus. Below the fresco is a wonderful calligraphic scripture with the words:

In anno 1539 in Leuen-to-Staufen Dr Faustus, an astounding nigromantic, died miserably as a legend says, at the hands of the highest Devil named Mephistopheles, whom he called his brother-in-law as long as he lived, after the Pact which ended after 24 years, who broke his neck and sent his poor, eternally damned soul to Hell.

The only evidence regarding the death of Faust in Staufen can be found in two texts of the Zimmerschen Chronicle published in 1565. One source cites the end of the magician 'in the herrschaft Staufen im Preisgew.' The other source mentions ' in or far from Staufen, the town in Breigew.' 'Preisgew' and 'Breigew' relate to the district Breisgau. There is a lack of other substantial evidence.

Nevertheless, the local tradition and belief has it that it knows exactly where Faust's journey which began in the realm of knowledge and ended with his sojourn in Hell. The last moments of Doctor Faust's journey to Hell began in the tavern called To-the-Lion, on the third floor, in room number 5.You can spend a night in this room and be inspired to write a play or a sonnet on the Life of Doctor Faustus or perhaps a modern-day Faust who lives in a metropolis like NY, London or Berlin

Three houses away in the Late Gothic town hall of Staufen you can find the foot-prints of the Devil on one of the uppermost stairs. The Devil had come in the guise of a human to pick up Faust, and left the town of Staufen with an enormous leap.

You stars that reigned at my nativity

Into the entrails of yon laboring cloud.

There's another story (German: Sage) which was published by Constantin Geres in the magazine 'Schauinsland' in 1882. It connects the Faust-story with the Johannites:

It was late in the afternoon in the year 1541 when a farmer and his son were walking along the country road from Krvzingen to Staufen. Suddenly, the weather changed for the worse and a gigantic bird with black wings flew over them. The appearance of the errie big bird scared them so much that they ran to a cross along the roadside and prayed till the scary bird flew away.

Thereafter, they set upon their journey to Staufen, where the farmer had to do some business at the tavern called The Lion. As they entered the tavern, they saw a doctor and another stranger. The stranger made a fool out of the farmer farmer and said that he'd been scared of a big black bird and had run in angst to a roadside cross and mumbled prayers to God.

The farmer found the words of the stranger extraordinary, for he and his son were the only ones who'd seen the big bird in the country road. And he knew that this stranger had flown over them in the form of the big black bird.

Shortly, the Doctor who was none other than the famous Faust, was taken by the Devil from room no. 5 of the tavern Zum Lvwen.

Goethe's Faust was published in two parts in 1808 and 1832. Faust Part I is a dedicatory ode and laments the passage of time, the passing away of friends and shows Goethe's dedication to his work. There are countless interpretations of Faust and the play symbolically embraces the irony of human life, commenting on human, social and political phenomena. He also praises the fundamental human virtue of endeavour, striving and endless creative activity found among poets, writers, artists.

It was at Schiller's instigation that Goethe began in 1797 to work again at Faust II. Whereas Faust I contains Knittelverse, blank verse, hymnic passages and strophic songs, Faust II has various rhyming measures, ottava rima, terza rima and trimeters.

However, the best known early literary version of the Faust legend came from the Frankfurter printer Johann Spie_. In this popular German volksbuch (people's book) Doctor Faust dabbles from theology to sorcery, makes a pact with the Devil for a period of twenty-four years. He lives extravagantly and riotously. Ans when his time is up he's carried off to Hell. Dr. Faustus is active at the University of Wittenberg in the Volksbuch story. It is a book of stern moral intention, with a raised index-finger, and a dreadful warning to others who might undergo alliances with Satan. The Spie_'sches Faustbuch is the source of Christopher Marlowe's Doctor Faustus (1589). Goethe on the other hand was obsessed by the subject of Faustus, almost his entire life. He enjoyed the puppet play called 'Puppenspiel von Dr. Faust' when he was a kid and also read the Faust Volksbuch.

Faust's Damnation (Fausts Verdammnis) an opera by Hector Berlioz is being stanged on October 20, 2007 at the Freiburger Theatre (Grosses Haus) and it is an attempt to use music to illustrate the complexities of Faust's soul. Ach, even if Faust's love and life were a fiasco, and he was damned to Hell, what survives is the work, the art and music.

There are English versions of the Faust legend by A.G.Latham (1902-5), Bayard Taylor (1908), L.MacNeice (1951) and Barker Fairley (1970) which deserve deserve mention, but I must admit I was chuckling with laughter, and I had tears in my eyes, when I read Rober Nye's Faust, told by a certain Kit Wagner, Faust's disciple. It was like reading P.G. Wodehouse in the days of alchemy and sorcery.

Here, yours truly would like to quote Faust as a motto for us all who're caught in life's vicissitudes like the famous Georgio Strehler did, when he acted in Goethe's Faust I and II at the Piccolo Teatro with a thousand voices and 12,000 verses in the year 1989:

Comment by Satis Shroff on July 2, 2011 at 10:06am
The story of Doctor Faustus has fascinated me since my childhood and it was a terific experience to visit Fauststadt Staufen in te Schwarzwald.I'm sharing my fascination with you in this article..