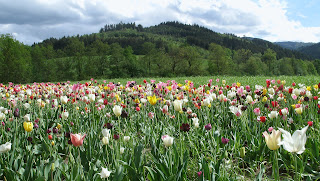 Ode to the Schwarzwald:
पाब्लो नेरुदा पुरस्कार २०१७: सतिश श्रोफ्फ़, नेपाल-जर्मनी
ALPINE GRATITUDE (Satis Shroff)
The hamlets are scattered,
Tucked away in the side valleys and spurs
Of the Black Forest,
Which was once dark and foreboding.
A forest that once conjoured myths, legends
And fairy tales.
Under the hay and homesteads,
You find men and mice,
Good natured maids and children,
Healthy and happy cows, goats,
Sheep and swines.
The Schwarzwald farmers paid low taxes,
For Nature punished them enough.
They couldn’t get rich on the craggy soil,
The high elevation and the long, raw winter.
Yet the Black Forest forced the soil,
To yield millet in Summer,
Wheat and barley,
Buried beneath a thick mantle of snow.
Ah, it’s already past the month of October,
The young calves are in the stalls,
After a colourful, traditional walk
From the higher alpine meadows.
There’s corn in the chamber,
Feed for the animals in the barns.
Around Freiburg the apple trees,
Are laden heavily with apples.
Your nostrils smell apple mixed with cinnamon and sugar:
Applekompott, apple moos, apple pancakes and pies.
* * * 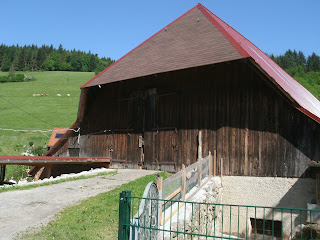 THE HARVEST FESTIVAL (Satis Shroff)
Erntedank is the harvest festival,
The German Thanksgiving,
Celebrated on the first Sunday of October.
The richness of Nature is depicted
By bread, fruits and flowers.
The ladies wear lovely silk costumes,
Displaying their exquisite stiching and sewing creations:
Jewellery, pompom hats and headgear with pearls,
Expressing their gratitude
To the church, God and Mother Nature.
The Alemannic bread of Kaiserstuhl is legendary,
A procession of bakers and vereine
Ends the Alemannic Bread Market in Endingen.
Neighbouring France is known for cheese,
Germany excels with 300 sorts of bread.
It’s such a delight to watch the calves and cows,
Mooing with their big collar bells,
Moving languidly down to the Erlenbacher meadows,
Over the golden, russet, brown fallen and withered leaves,
Lain by the wind like a rich carpet.
Around the Goldberg Hall and the cloister,
The alpine air is filled with cow bells,
The clash of beer glass and oompa music
Of the red-cheeked village musicians.
A homeland that has grown
Withe the centuries,
Thanks to the word of farmers,
Beautiful undulating landscapes,
Shaped by dextrous human hands,
From Erlenbach upto Feldberg.
Fresh air and lush green grass in the summer months,
Followed by stacks of hay and tangled hedges in autumn and winter.
In the vale below,
The local Ganter brewery opens
A keg of beer in the Goldenberg Hall,
The Old Timer Bulldog parade begins,
Followed by music of the brass band from Oberried.
The visitors relish the Badische cuisine:
Schweinebrated, würst, schnitzel, spätzle and salad,
And round it up with self-baked Schwarzwäldertorte,
Cheese cakes and wash it down with warm coffee. 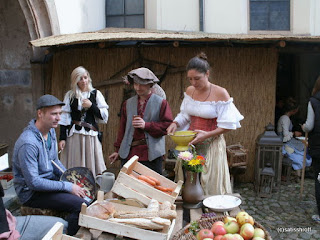 The country women and farmers
Show and sell their creative wares,
Mr. Müller gathers alms for the church and cloister.
In the priest’s hall there’s a Kasperle theatre,
A puppet show staged by the Kindergarden of Oberried.
Frau Julia Lauby delivers a speech
On the assets and different races of the Black Forest cattle.
The birch trees have golden leaves on their boughs.
In the evening you sit,
Swinging with your neighbours
In an Alemannic Schoof.
The Goldberg Hall moves to and fro,
To the sound of ‘Schwarzwald Sound.’
I take a swig of the brew,
And head for Kappel in the Dreisam Valley below,
Before the mirth and fun grow fast and furious,
As Robert Burns admonished
In Tam o’ Shanter.
* * * 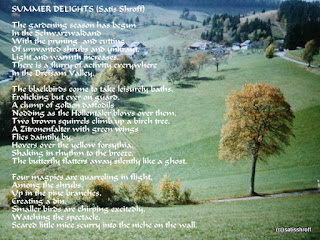