NEPAL: Let us Live in Peace, despite the Differences (Satis Shroff)

NEPAL : Let us Live in Peace, despite the Differences (Satis Shroff)
India and Nepal have such a lot in common: the Devnagari script, Hinduism and Buddhism, the Nepali/Gorkhali language, culture, both have a British colonial past. India was ruled by the British but Nepal sent its soldiers to fight under the British flag. The Gorkhas are India’s elite troops.
There are so many Indians doing business in Nepal and numerous Nepalese working in the Indian subcontinent. It is possible to live together, despite our ethnic differences. We worship the same Gods and do the same Hindu and Buddhist rituals. We love Indian classical music, Bollywood and our Himalayan folkmusic. We all speak the same English language albeit with Indian and Nepalese accents.
India lost the sino-indo war in 1962 but it won the wars in Kutch and East Pakistan in which the Gorkha regiments play important roles. Due to our common religion we have a special connection to India.
Janakpur was regarded as the capital of the Maithila kingdom, who’s king was Sita’s father, the holy Janak. Maithila plays an important role in the great Hindu epic Ramayana. Rama and Sita are worshipped as incarnations of the God Vishnu and his spouse Lakshmi in India, Nepal and Bali.
Today, the people of the Lowlands (Madesh) and the Highlands (Parbatey) must unite to form a strong Nepalese nation. In the absence of a charismatic, unifying figure like Prithvi Narayan Shah, who unified Nepal with the khukri (remember the battle of Kirtipur), we shall have to come to a solution through discussions and debates because we are a democratic republic. Let us take the path of peace and tolerance and not the path of terrorism and bloodshed. Let us respect, tolerate and speak with words in peace, instead of letting our emotions, and lower instincts overwhelm our sane minds. 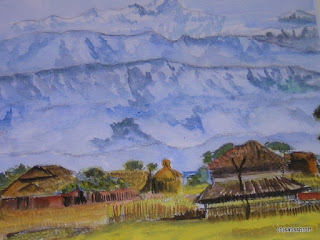 There are Madhisays who’d like to be a part of India. Such people should just cross the Indian border and remain in their land of choice. In German there is a saying: Reisende sollte man nicht abhalten. People who want to go shouldn’t be stopped. We’ve seen it in the case of the Berlin Wall that even a big, long wall couldn’t stop the hearts of the people. Liberty, equality and fraternity are what France is fighting and pleading for at this very moment.
The Nepalese from the Highlands and the Lowlands should sit together peacefully and settle the issues through the use of mutual-respect, tolerance and peace.
Eingestellt von Satis Shroff um 02:28