“connect the dots backwards” to borrow a Jobsian parlance, to understand what Series 9

is about: Innovation. Disruptive Innovation, which Harvard Professor Clay Christensen

cations at the bottom of a market and then relentlessly moves ‘up market’, even

data further below as well as Series 3 (which focuses on brands), further

where by contrast respectively, their disruptees

stores, fixed line telephony and everything

AT&T, Sprint & the rest once stood for +

of IBM from the game by Microsoft

and Apple. That long game (see

Amazon below) of low growth

All five of the following learnable discovery traits and practices of highly innovative people and in particular, successful entrepreneurs, aren't always necessarily simultaneously dominant in one individual. But they comprise:

① Associating & Connecting » » Steve Jobs said it best: “Creativity is just connecting things. When you ask creative people how they did something, they feel a little guilty because they didn't really do it, they just saw something. It seemed obvious to them after a while” where it wasn't, or still isn't to others. That is why Series 9b featured Sean Parker who is hated but whom I admire and greatly respect. Professor Gregersen offers more anecdotes and insights about this trait. Acquire or enhance associative skills and habits by unlearning the thoroughly unproductive habit of declaring “gibberish” what you can't understand or fathom, and graciously ask questions. 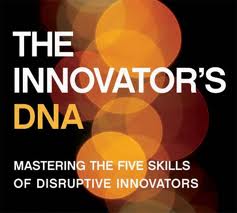 time and productivity. But doing it is counterintuitive. I often tell friends I have the number of 99% of unproductive and negative commenters online. I quietly watch them not for minutes but years so that no amount of inauthentic trickery disguised as genuine communication gets past the firewall. It turns out Andrew Keen of Tech Crunch lives by the same code.

Business anecdotes are legion, and again both the book and Professor Gregersen (above) offer solid, deeper and readily transferable applicable insights about this trait and how it helps ensure the rise and survival of both known game-changing innovators and up-and-comers. The story of Intuit founder Scott Cook and Quicken is just one of them. But as Matthew May notes, “Innovators carefully watch the world around them, and the observations help them gain insights into and ideas for new ways of doing things...scrutinizing the behavior of customers, suppliers, and competitors to identify new ways of doing things” is their practice and way. That's why we call this uniquely honed talent (from which Situational Awareness is also derived), Observational Skills.

③ Experimenting » » I recently featured Amazon founder Jeff Bezos posing the question: Will you be a builder, a cynic or clever at the expense of others? Same question he asked the 2012 Princeton graduands. And I extended that question because the ignoramus online and in this world operate under a backward mindset that says that everything they encounter has got to be either fake (like them) or a cause for adulteration. But there's always a method to the madness of innovators even if surmising that where you see Series 9d, there's got to be a 9c, 9b, 9a and even Series 1, doesn't require high IQ.

Experimentation is an art. And those playing a short game (which Jeff Bezos grew up not playing) fully appreciate that.

The long game of Innovators involves everything mentioned in Series 9c (under Engaging the Mind) as well as the habit of openly embracing and piloting new and often difficult ideas for practical purposes while the competition stares at the same dots with walled stagnant thinking. Failure to them, is nothing.

④ Questioning » » We demonstrated some of this in Series 9a. Innovators consistently challenge conventions and “demonstrate a high Q/A ratio, where questions (Q) not only 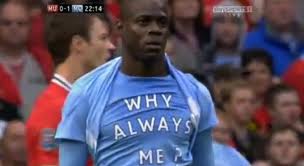 outnumber answers (A) in a typical” encounter. Not because they're trying to flaunt anything. In practice, they wake up curious and ooze ideas. And because of that, they're constantly wondering why it has to be this or that way. What others take for granted, they question.

Consider the bewildering, or if you like, humorous trademark question of Italian striker Mario Balotelli after he scores goals (above). Of course, the business wisdom behind his antics is debatable. And even Forbes writer Kurt Badenhausen has his own good opinions on jailed Boxing maestro and Pound-for-Pound ring king Floyd Mayweather Jnr. who sits atop the world's highest paid athletes list. More relevantly, 2012's Boxing, Cycling and other sports doping scandals have vindicated his uncompromising stance on mandatory 100% random blood testing by anyone wanting to fight him. Such insight originates only from innovators bold and 'observant' enough to question conventional wisdom knowing at a very basic level as Professor Gregersen (above) points out, that obvious things aren't obvious to the average person.

⑤ Networking (for ideas) » » Incidentally, there's a consistent role Positive Psychology plays in the way highly innovative people communicate and live. Non-innovative environment and people create social silos, cliques and yes-people who validate them. But I used this previous blog which doubled as Breakthrough Ideas (May 2012) to drive home the fact that demonstrate that innovative people transcend 'the cult of the average' by living out Kevin Liles' #8: Step Outside Your Box: M.I.X. with people who think different.

Instead of wanting to delete the iconoclasts, the inconvenient truth-tellers, outliers or 'weirdos' or misfits with incontrovertibly positive ideas, study them, Shawn Achor humorously counsels. And as I've said time again through self-development blogs like the Spring 2012 Theme: Creativity really is all about ideas and so is the networking (for ideas) effort/strategy behind what innovative people put out. Ignore that, and you miss the entire point.

There's a slight complication to the trick and this particular DNA of innovators because it's really a balancing act explained in the book cited above (and video). But 老子 (Lao Tzu) deserves credit for simplifying this trait, which like Andrew Keen above, guides the principle behind my own moderated webpage/blog stance: “To attain knowledge, add things every day. To attain wisdom, subtract things every day.” Same principle attributed to the Bezos blog cited above. The art of first differentiating by way of daily practice and then subtracting junk from substance or noise from signal is practiced by Matthew May, too. And these traits are observable in each of the leaders behind breakthrough innovation at the world's 50 most innovative companies (below).

Insead recapitulates: “Innovators are intentional about finding diverse people who are just the opposites, that they talk to, to get ideas that seriously challenge their own,” Gregersen says. Creative and innovative entrepreneurs look for people who are “completely different in terms of perspective” and regularly discuss ideas and options with them “to get divergent viewpoints.” There could be differences in gender, industry, age, country of origin, or even politics. “If I'm on the right, they're on the left, that kind of notion. And those sorts of diverse inputs in terms of conversations enabled them to get new ideas,” says Professor Gregersen.

Point & Click ANY Item of Interest to Zoom or for Details 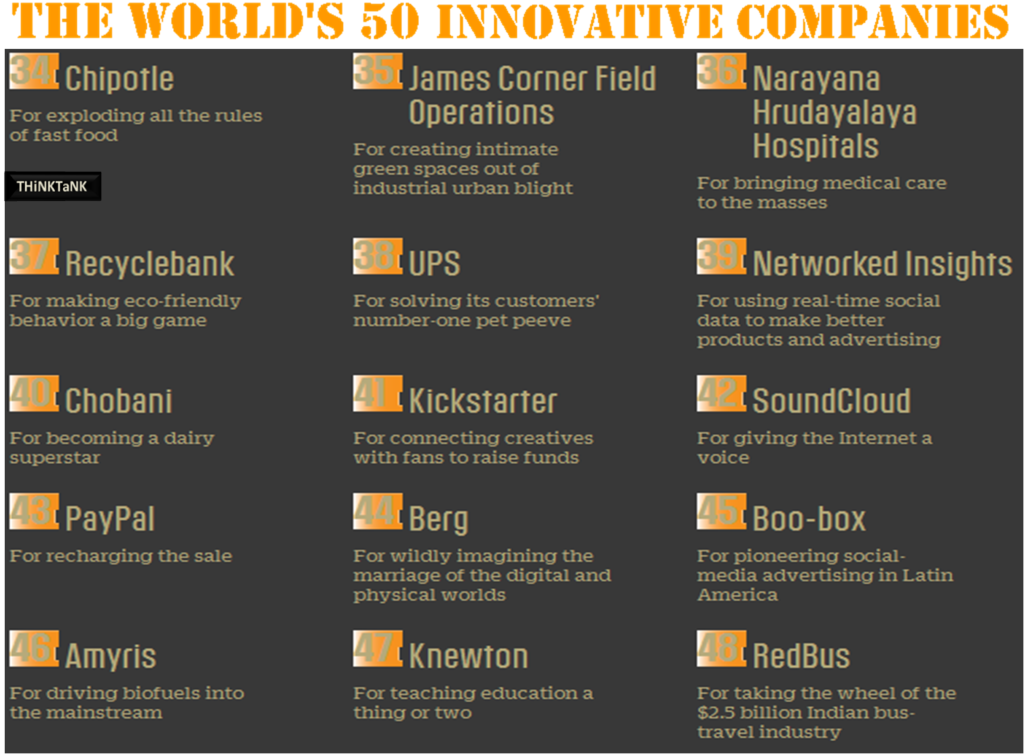 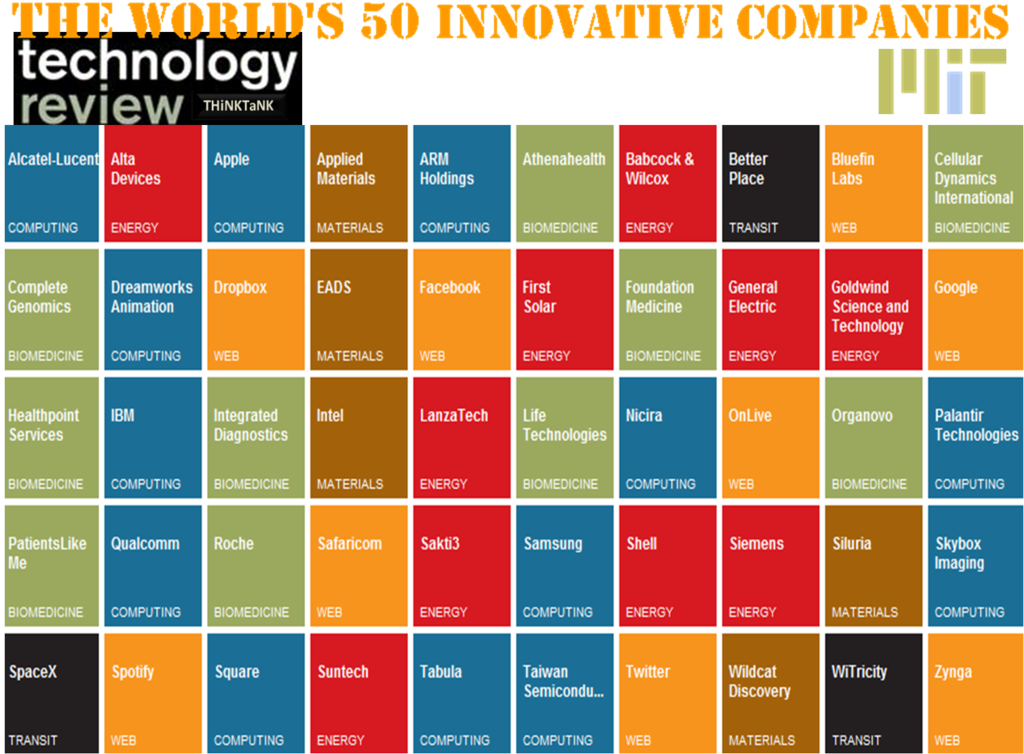