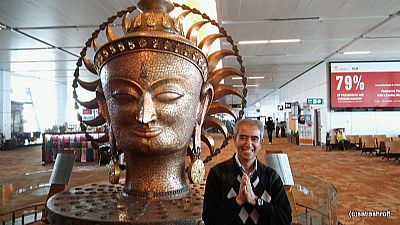 National literature no longer means very much, the age of world literature is due.

Global writers and poets are connecting internationally via the internet. Why should only the literature mainstream in the USA, Australia and Britain take the lead?The world literature propagated was entirely Eurocentric and Goethe himself was a German universal writer one of the most original and powerful German lyric poets and his Faust I & II is a melange of comedy, tragedy, pathos, wit and satire, that is, magical beauty.

However, his collection of pseudo-oriental lyrics ‘West-östliche Divan’ (1819) is closed associated with Marianne von Willemer, one of the most gifted and intellectual women in Goethe’s life. Goethe spoke of world literature during his times. But what we experience today is global literature, which is not a western literature with national borders. It is definitely post-colonial, post-ethnic and post-national. You could call it non-whitey, non-mainstream literature. This global literature is written by writers and poets who have left their homes for diverse reasons and are, of course put into the ‘migrant literature category.

This global literature is nervous, vibrant, dynamic and these writings have had a quiet existence since decades nut isn’t being noticed by the greedy, sensation-seeking mainstream publishers from the former colonial nations based in the UK, USA, and its ally Australia, Japan, France and Germany. These global writer and poets have, due to their migration, changed their cultures and adopted new languages of the host countries. These authors came and still come from Asia, Africa, Caribbean isles and since they’re obliged to write not in their mother-tongues, they take to literature like fish in water, observing and comparing their new experiences with the old, and write about their lives as global travellers and existential trespassers of international boundaries not only in their lives but also in their minds.

It is a sad fact that the literary market is dominated by Anglo-Americans throughout the world. With Behari, Nepali, Gujerati, Bengali or Malay alone you couldn’t reach the world market which is still dominated by the English language. Would the world have seen and read Tagore’s Gitanjali or Shakuntala if it hadn’t been translated into English?  The Nobel Prize for Literature to a Bengali poet has inspired generations of Bengalis and others in the  Indian subcontinent, as have the Man Booker Prizes for Rushdie, Kiran Desai and Pulitzer Prize and PEN/Hemingway Award for Jhumpa Lahiri.

Why are Nigerian Chinua Achebe’s books well known in the world than the ones of  those of African writers writing in their own mother tongues? If Ngugi wa Thiong’o hadn’t moved to the Britain and later to the USA, why, he wouldn’t have become a professor for comparative literature and performance studies at New York University in 1992.

It is high time that the upcoming authors from the Southern Hemisphere (South America, Africa South Asian and South-East Asia got together and made their own literary world, with book publications, poetry events and awards. It is time that such writers and poetry associations around the world got together and created their own prominent poetry festivals to combat the discrimination going on in the world’s publishing markets. Global literature is here to stay as a resurrection from the ashes of bitter post-colonial experiences and thanks to the proliferation of social media and e-books. Down with the discriminatory Anglo-American, French and German mainstream literature markets that have been ignoring and discriminating global poets and writers.

The fall of the British, French, Dutch and other empires led to changes in relations with these powerful countries and resulted in revolutions as far as east-west relations were concerned. It was also a catalyst for great migration waves because the western cities destroyed during the World War II had to be reconstructed, factories renovated and rebuilt and manpower was missing. Most able men in these countries were injured, crippled or dead. And so the migration brought also changes in these western societies.

In most of the narratives of the global writers and poets the theme of identity takes a central position. Who am I? What am I doing here in this foreign world that I have embraced? Where do I belong? Questions about the hybridity, acculturation and integration,  mixed cultures and multiple-identities arise, as men and women of different ethnic backgrounds marry, bring for progeny. Does migration lead to a loss of identity or it a win-win and thus enriching situation? The global authors write a literature of being in-between and growing within foreign cultures that they have accepted. They write about the changes and exchanges between two cultures and the question of: ‘Where do I belong?’ is raised. Is it a world in transition? An improvised life for a temporary period?

In the case of the asylum-seekers the question of the stay-permit or the green card, as the case may be, hangs like a Damocles Sword above the writer or poet. A toleration? A Duldung? Or will my asylum-request be refused and I’ll be obliged to board the next plane to my country?

A lot of writers and poets from ex-colonial countries like India, Pakistan, Nigeria, Iraq, Somalia, Ethiopia have to chew on the mistakes and fatal decisions made by those in power during the pregnancy, birth or miscarriage of their respective countries. The hatred between the Hindus of India and the Muslims of West Pakistan is a glaring example of how the partition of a country should not have been carried out. The British left the Indian subcontinent without solving the Indo-Pakistani problem. The result was a historical mayhem, anarchy, chaos and mobocracy. In other countries independence from colonialists led to dictatorships, civil wars, economic crisis, wanton corruption and open or hidden nepotism.

The colonialists interfered not only in the politics and economies of these countries but also in the socio-cultural lives of these people and had regarded them as being ‘inferior’ to their own British, French, Dutch, Portugese, Spanish and so-called Australian (actually imported Brit) cultures. There was no collective psycho-therapy for these unfortunate people, who were left on their own when the colonial powers retreated. Left to their meagre means to exist because their country’s wealth had been plundered and stolen ‘legally’ by the colonialists. Even today the treasures from the former colonies can be seen for a fee in the British, French, Belgian, German and Rijks (Netherlands) museums.

You must either conquer and rule

Or serve and lose,

Be the anvil or the hammer

Even the history of India has to be re-constructed and re-written by modern writers for the books from the colonial times had a jaundiced perspective and viewpoint. Asian countries and its people are badly described by the Brits and French in their versions. It’s high time that Asians described the Brits, French and other colonial characters in novels and poems through their own eyes and show the world what it was like to live under colonial rule and of how the traditions, beliefs, religions and cultures were ignored and ridiculed by the masters of the empire.

Writers that written with a heart for the downtrodden in the former colonies are undoubtedly V S  Naipaul, Salman Rushdie, Joseph Conrad, Alexander Hemon, Hanif Kureishi, JM Coetzee and Michael Ondatje. It is amazing how many poets and poetesses there are in the different websites around the world. This is a commendable and formidable resource and must be channelled to produce not only festivals but also works of literature for posterity. In this context I'd like to mention Epitacio Tongohan of Pentasi B World Freiendship Poetry, Leyla Işık from Kibatek,Turkey, Maria Miraglia and Saverio Sinopoli from the Neruda Association from Italy and India's Manthena Damodara Chary's endeavours to bring out certificates and anthologies of the best poems on his websites and now we have Singapore Writers under Hj Harisharis Hj Hamzah with a taste of Malay and Singaporean Poetry at an international event in 2018.

Satie meets funk and jazz. part of an arrangement in progress. recorded in july 2018. ❤ thank you for your support ! ❤ § you're invited to subscribe to the ★...
19 hours ago
0 Comments