What to do when a stranger says:

"Can I make friends with you?"

First of all, who IS a "stranger" really?

What of your part (as a responsible individual) in making any human relations possible?

What is so wrong with "daring" to request another's acquaintance? Or friendship?

Have you ever applied to a college/university, for a job, or confessed love for someone and been rejected?

How exactly wonderful would the "right" so-called "stranger" feel for being
"rejected" when all they have/had is/were positive intention(s)?

Anna Quindlen said: "The life you have led doesn't need to be the only life you'll have." And Henry Boyle, —"The most important trip you take in life is meeting people half way."

Sure, I've met quite a lot of stupid people with stupid things to say...People who can waste your time (and life), if you let them. Nevertheless, "you miss 100% of the shots you never take."—WAYNE GRETZKY.

If you're arrogant, elitist, impatient, unimaginative, condescending, close-minded, inconsiderate, stupid, socially paralyzed yet a(n) internet poseur pretending to have excellent communication and human skills when in fact the contrary is true, then you're bound to give an oversimplified (if not stupid) advise in response to such a complicated question.

If, on the other hand, you have mentees who have approached you seeking a canned answer on such topics and yet your own human experience has taught you the appropriate answer varies (from type of person, to timing and time of day, to place, tocultural milieu, to (your) mood...even to issues of concern for your own security as well as if you wanted to go the extra mile: taking into consideration the stability of the person soliciting your friendship, then your answer—I'd argue—stands a chance of being most appropriate.

"Only retards will try to make friends this way" and

"Don't bother sending me friend requests if i don't know you already. I will just ignore them"

are exactly why I always say: "Open-mindedness is easier to claim than practice. Everybody on the internet thinks they're open-minded" when in practice, it's harder.

I mean, think about it, if you have respect for logic.

From a so-called 'perfect stranger's perspective' what kind of world or society would we have if such people feared such comments?

"To escape criticism: do nothing, say nothing, be nothing." —ELBERT HUBBARD.
Right?

Anecdote 1:
I have an American friend. Decent man. Married with children. Old enough to be my dad.

Before he eagerly came up to me and shook my hand someone (not I) would have labeled him a "stranger". We met in a bank in Nanshan years ago and have been great friends since.

He was there doing his thing with his Secretary, and so was I...with a female friend. But I noticed he kept making eye contact from a distance. To me, he was asking: "Can I make friends with you?" long before opportunity brought us closer in a queue/line.

All I had to do was avail myself and be a human being. Not a major league a*shole like some people I've seen and met around here (context: a rancor infested Ning site in China), or for stuck up females: a hopeless meat headed b*tch. And at least that afternoon, I succeeded.

Anecdote 2:
An obviously hurt Mainland Chinese student once came to me talking about: "What did I do wrong?"

She'd seen a British couple at a Post Office and gone up to them (God bless her heart) with the line: "Can I help you?" Mind you, she wasn't an employee. Just an English major thinking (no..."ASSUMING") they needed help.

To make a long story short, they treated her like crap.

So, after laughing out loud (at her, I confess), I put my arm around her and told her everything she did wrong, including making it clear to her that she must have offended them as much as she felt insulted by their disinclination to acquiesce to her offer, and what to do to avoid such faux pas next time.

Experiences like hers are legion for a variety of social, educational, intellectual (as in self-development, where formal education fails one), and even political reasons I don't care to get into right now but all of which create almost insurmountable huge gaps in social skills and common sense that guarantee foreigners and well-educated Chinese alike a stupid or weird-sounding solicitation, question, or comment every now and then.

Yet, as Shakespeare said: "There is nothing either good or bad, but thinking makes it so." So, THiNK attitude! 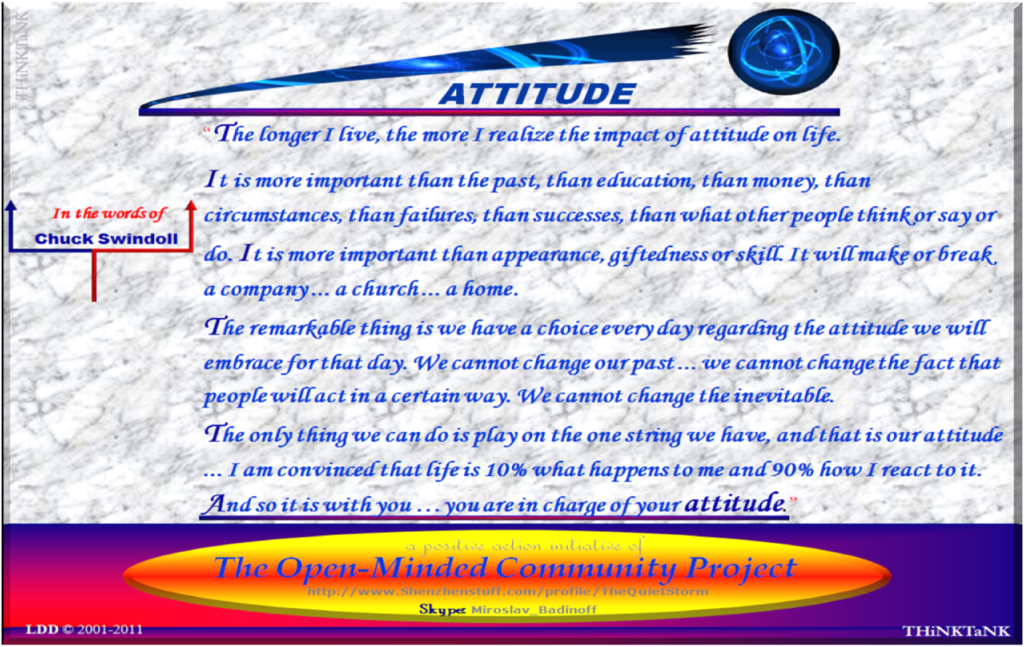