THE TOWER RAVENS (Satis Shroff)
(Subtitle: Evermore, for the Queen)
The guard in the red jacket
Stood at attention with his rifle,
Watching the ravens on the lawn
Of the Tower of London.
The ravens were loyal to the Windsors,
Like the brave, sturdy Gurkhas.
The swarthy ravens would never
Abandon the tower,
So a legend goes.
For if they did
It would mean
The end of the Kingdom.
Charles II said in the 17th century:
It's better to make sure,
Thereby gave six black feathered friends
Boarding and lodging.
The raven-mater looks after them,
Prunes their feathers regularly,
So that they don't fly too far.
In 2006 there was fear of bird-plague,
So the ravens were obliged to caw in prison,
As a measure of protection.
Two years later came the financial crisis,
And many Brits saw danger ahead
For the beloved Kingdom.
The six raven males Gwyllum, Thor, Baldrick,
And the ladies Hugine, Munin and Branwen
Were introduced to four more.
Indeed, it's better to be on the safe side.
Nevermore, shall the Kingdom be doomed.
The ravens sang unanimously:
Evermore, for the Kingdom.
Evermore, for the Kingdom.
* * * 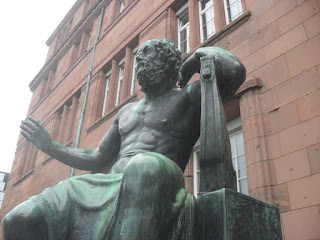 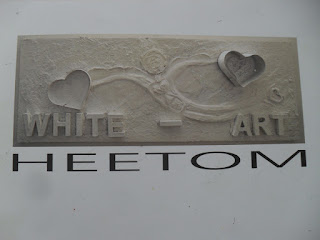 ART AND WELLNESS (Satis Shroff)
Herbert Ernest Tombreul's art exhibition carried the title 'White-Art' and he runs a Gestaltungs School. 'White-Art' is a 3-D painting showing an angel figure flying in the middle of the painting with two hearts, where his hands should be. The feet have also hearts on them, heavily sprayed and brushed with white. The hearts are forms made of tin that Mom uses to bake cookies at Christmastime.
Tombreul alias Heetom is a 71 year old painter-turned-artist. He has been busy with colours in the rooms and housefronts of his clients till he got sick of uninspired work, and living between grey, lifeless walls.
Heetom looks at his life and his own vicissitudes of life which had all the ingredients: dearth of orientation, financial problems, lack of courage and a burn-out syndrome. He sees all these as a chance to help younger generations with his own experience and render valuable counseling to make them find how their paths and aims, and to make it by being aware of one's creativity and use it too in creating an individual wellness world that can be brighter and colourful in the daily grey of life.
Heetom is a Berliner who has settled in Freiburg-Kappel and loves to sing songs. He was with the men's choir in Kappel and now he sings with Bella Capella, a mixed choir. He is a decorator and a Gestaltungs-artists and lives in his own house with its wellness walls. The stairway has a lot of his own paintings and functions as 'Gallery Heetom' where he holds exhibitions of his own works and those of his artist friends every year on his Birthday (7th of May). He uses his other rooms also for creativity and artistic expository space. He calls his life picture and shows numerous stars and possibilities in a golden lake to the summit of a mountain.
On a table in his atelier is his latest book with the title 'Utopia' and a collection of loose pages with paintings, instructions and words of wisdom in a file, and he gives his philosophy of life in a CD to those who need it. Around him you will find a collection of half-finished pictures and onjects that could possibly used for future projects, for he's an artist, what you might call a life-artist (Lebenskünstler).
Herbert Tombreul doesn't give theoretical lectures if you engage him. He lets his clients come to him with their wishes and imaginations, councils them and accompanies them to arrange the material and qualities in which capacity. After that, he goes to work with his clients together. You have to work with him if you're his client and you develop the project of your dreams till it is a finished product. It's a fruitful cooperation and it's not only about the pictures that hang in your room but also the installations in the rooms of your house, its optimal lighting, as well as
the details of the exhibits in the rooms. He turns a standard room into a wellness one, and a doubting and questioning client turns into satisfied customer. This makes Herbert happy and he gets richer in experience.
Info & contact: Heetom Gestaltungsschule, Ziegelmattenstrasse 14, Freiburg, tel:0761-6967655, www.heetom.de
* * * 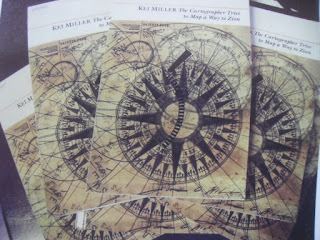 THE PATH TO POETRY (Satis Shroff)
Kei Miller is a post from Jamaica and London. He talked about his approaches to the writing and teaching of poetry at a seminar with university students of an English Poetry Master Class and members of the Freiburger Writers' Group.
He'd brought along three poems: My Name, Shirt (Robert Pinsky) and the Quality of Sprawl. My Name: what does your name mean to you, to your parents, to your grandparents? How did your classmates react to your name at school? The poem goes: 'In English my name means hope. In Spanish it means too many letters. It means sadness, it means waiting. It is like the number nine. A muddy colour. It is the Mexican records my father plays on Sunday mornings when he's shaving, songs like sobbing.'
'The last lines are very personal. How relentless, precise it is,' says Miller.
And the story goes she never forgave him. She looked out of the window her whole life, the way so many women sit their sadness on an elbow. I wonder if she made the best with what she got or was she sorry because she couldn't be all the things she wanted to be. Esperanza. I have inherited her name, but I don't want to inherit her place by the window.'
Poetry is defining and describing the environment. It can be hilarious or inappropriate but amusing. We're engaged with re-defining the world around us. The world is insufficiently defined. That's where poetry and novels come in. Goes to talk about holiday in Caribbean places where he grew up. Like Reach Falls. A fascinating place which was originally the Reichfalls in a culture where the people weren't allowed to read or write. It's preserved there and you have to unlock the meaning and pronouciation because people heard the name wrongly pronounced. Definitions happen in poetry by defining. In this context he mentions Sandra Cisneros 'Hourse on Mango Street.' And reminds us of so many many sitting their colonial sadness on an elbow in India, Africa, Sri Lanka, Jamaica ---where the British colonial Raj was.
What's in a shirt? Here he's talking about a poem 'Shirt' by the US poet Robert Pinsky. There's history flowing out of a shirt-poem. It's like a flow. What's normal than a shirt for men? Pinsky packs history, tragedy in stories folded into a poem. The poem is topical in Bangladesh, India, Thailand and Burma where the negative results of cheap out-sourcing can be seen when a factory burns. The shirt that you wear feels insufficiently defined. It's astonishing how far you can go. There's history behind them, layers of stories, as you watch the poet unraveling, unpicking the poem. 'The back, the yoke, the yardage. Lapped seams,The nearly invisible stitches along the collar Turned in a sweatshop by Koreans or Malaysians.'
Miller is a writer and does academic writing across a range of non-fiction. As a teacher and supervisor, Kei is interested in the Caribbean, postcolonial and creative projects that exist at various borders, between poetry and prose, between the narrative essay and the traditional academic essay, between the calm and objective, passionate and polemic.