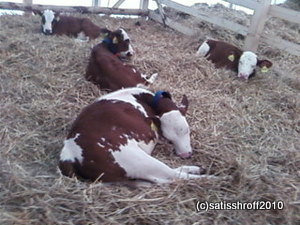 Denise Epstein was 13 whenher mother Irene Nemirovsky was deported to Auschwitz, where she eventuallydied in 1942. The daughter is now an octogenarian and was instrumental inhelping her mother attain her place in the world literature. Irene Nemirovskywas a writer who could look into the souls of humans and make music with words.Her masterpiece Suite francaise was published in France in2004 and was immediately awarded the Prix Renaudot.

The characters of Fire inBlood are  drawn from a rural Frenchtown in Burgundy, a wine-growing area where people are simple and sticktogether, want to retain their ‘peace’ and don’t like the police and theauthorities. A place where all people show conformity and keep their mouthsshut. Peace is a synonym for not wanting to be involved in the affairs of otherpeople. The author’s attitude towards the characters has a universal appeal,for it could happen anywhere in the world in a closed-circuit society whereoutsiders are shunned and not generally accepted. Nemirovsky shows not onlywhat people do to others but also what the passage of time does to us all. Thecharacters aren’t flat and every character bounds into life and you an imaginethe world that she creates in her 153 page novel still goes on with its ownpace without much changes. The community itself shows a predatory behaviour ofextreme cunning.

The major theme of Fire inBlood is love, poverty, arranged marriages and extra-marital affairs that leadto complications and new story developments. The protagonist Sylvestre alsocalled Silvio tells the story in the first person singular and recalls storiesin front of the fireplace about his beautiful, graceful cousin Helene and herdaughter Colette, Brigitte Delos and Francoise, their marriages, happiness andboredom and the seasonal changes of the Burgundy countryside. Silvio speaksabout impatient young people and the perfectly balanced older people at peacewith themselves and the world, despite the creeping fear of death. The book isreplete with the truths, deaths, marriages, children, houses, mills, dowry,haves and have-nots, stinginess, love-affairs, hatred, deception andbetrayal.  Nemirovsky is an excellentstory-teller and reveals her tale of flaws and cruelties of the human heart inan intricately woven story. She builds up suspense and you feel the catharsiswhen an innocent-looking protagonist tells her version of how a man wasmurdered.

The theme is traditional andfamiliar and is psychologically and socially interesting in intent.

Silvio tells about hischildhood and about children asking their parents how they met, fell in loveand married. He also mentions past loves, former grudges, inheritances, lawsuits and who-married-whom and why in the French provincial setting. The storyplot is slow at the beginning but gathers momentum, and the climax is not the murderbut how the author unfurls the story of the confession. In the end Silvioconfides to the reader how much he still loves his dear cousin Helene, who’smarried to Francoise.

The intellectual qualities ofwriting of Nemirovsky are her cheerfulness, sudden twists and power ofobservation which flow into the story making it a delightful read. She givesyou the impression that her tale is linear, only to show you that there’s atwist that takes narration in another direction. Silvio, the Ich-Erzähler, says to Colette, who wantsto involve him in her family drama: ‘Tell them you have a lover and that hekilled your husband.. What exactly did happen?’

wit and humour and there’srhythm in the tale.

Nemirovsky employs thestylistic device of symbolism to characterise the farmers and theirhypocritical nature, how they mob people they don’t prefer to have around themand how they indulge in backbiting. A stingy 60 year old farmer marries  a lovely 20 year old woman and the gossipsbegin. Silvio remembers how Colette had once told him he resembled a faun: ‘anold faun, now, who has stopped chasing nymphs and who huddles near thefireplace.’

This is the confession of aman who had once fire in blood, and a meditation on the various stages of life,the passing of time, in which youth and age are at odds. A recurring theme isthe seed from which problems grow: ‘Imagine a field being saved and all thepromise that’s contained in a grain of wheat, all the future harvests…well,it’s exactly the same in life.’

Nemirovsky’s use of dialogueis very effective and takes the story forward.

Her literary oeuvre rangesfrom an extraordinary collection of papers, Fire in the Blood, Suite francaise, David Golder, Le Bal, the CourilofAffair, All Our Worldly Goods.

Subtitle: Moaning in All Eternity

My life came to an end,

I, Irene Nemirovsky, a writer

I live now in my books,

In my daughter’s memories,

For she fights against

The injustice of those gruesome days.

Died shortly after I landed in Auschwitz.

I died of inflammation of my lungs,

In the month of October.

That very year the Nazis deported

Who’d pleaded to have me,

His wife, freed from the clutches

They also killed him.

Were saved by friends

Of the French Resistance,

Tucked away in a cloister for nuns,

They had my suitcase with them,

Where ever they hid,

To them it was not only a book,

But my last words,

That I’d penned in Issy-l’Eveque.

I wanted to put together five manuscripts

In one: Suite Francaise,

That was my writer’s dream.

I could put only

‘Storm in July’ and ‚Dolche’

In my two books I’ve written

About the flight of the Parisians

From the victorious Germans,

The awful situation in an occupied hamlet.

To save their skins,

But my work hasn’t lost its glow,

You can feel its intensity,

Was humiliated and had to capitulate,

Losing its grace, dignity and life.

I was born in Kiew,

Fled to Paris via Finnland and Sweden,

After the Russian Revolution.

I was a maniac,

When it came to reading,

Had a French governess,

Went often to the Cote d’ Azure and Biarritz.

I studied literature in Sorbonne in 1919.

I began to write:

About my Russian past,

The colour of the literature I wrote

Is blood from an old wound.

From this wound I’ve drawn

The maladies of the society,

I was influenced by writers,

From Leo Tolstoi to Henrik Ibsen.

Moaning in all eternity.