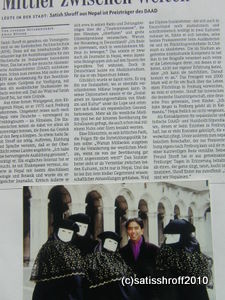 
Commenting on her book 'Third World America', Arianna Huffington says: "Growing up in Greece, everyone knew someone who'd left to find a better
life in America. That was the phrase everyone associated with America: "a
better life." When I came to live here in 1980, I knew there was no other
place I'd rather live.

Thirty years later, I still feel that way. But something went wrong -- terribly
wrong -- and put our country on a very dangerous path that threatens to
transform us into Third World America. It's a jarring phrase, I know, but I
decided to make that the title of my new book, which is being released today,
as a warning -- to make it clear that if we don't change course that could very
well be our future. But the book is not just a critique of the many ways things
are broken -- it's a practical guide for how to fix them."

We are all humans and members of a group of mammals called Homo sapiens.We have
the same genetic structures and have different complexions which have evolved
to combat the irradiation from the sun.

Even the so-called First World people like to sun themselves and are proud of
their tans.But when a guy with a permanent tan, due to the melanocytes under
his epidermis comes along, it becomes a problem for the pale people.Pale people
have cancer of the skin, the darker one's don't. So it's lovely and useful to
have a darker skin. The cream de la cream from the Third World bring their
knowledge of technology,medicine and the arts to the American and European
mainstream.

The Third World professionals earn money in the USA and Europe, but they also
pay taxes in the respective countries.So what are pale faced people sulking
about? Tot me, as a writer and poet, it sounds like a brown-shirt argument. Oops,I
forgot to mention that I haven't read the book as yet. Even Thilo Sarrazin has
brought out a book deriding the moslem section of the German population and
their so-called desire of foreigners not to integrate themselves in the German
mainstream. A lot of explaining, intercultural, transcultural work to be done
in this matter in Germany, Europe and in the USA.

I'm for togetherness (Miteinander), tolerance, respect for others,no matter
what their colour, creed,genetic or geographical, language or cultural
differences,one world,one planet, one heaven, one hell,a universal
God,spirituality and compassion towards living beings,love of Nature and the
wonderful plants and animals it bestows us with. Did I forget anything? Shanti,
Om shanti! Amen.. 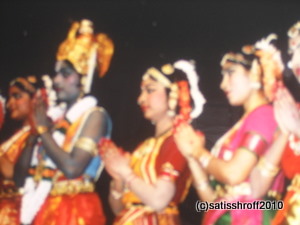 A namaste from so-called Third World dancers to the First World audience
(c)satisshroff 2010 . A 'namaste' means 'I greet the Godliness in you, a
wonderful greeting when meeting friends instead of saying 'Guten Morgen'

Satis Shroff is a poet and writer based in Freiburg (poems, fiction,
non-fiction) who also writes on ecological, ethno-medical, culture-ethnological
themes. He has studied Zoology and Botany in Nepal, Medicine and Social
Sciences in Germany and Creative Writing in Freiburg and the United Kingdom. He
describes himself as a mediator between western and eastern cultures and sees
his future as a writer and poet. Since literature is one of the most important
means of cross-cultural learning, he is dedicated to promoting and creating
awareness for Creative Writing and transcultural togetherness in his writings,
and in preserving an attitude of Miteinander in this world. He lectures in
Basle (Switzerland) and in Germany at the Akademie für medizinische Berufe
(University Klinikum Freiburg) Satis Shroff was awarded the German Academic
Exchange Prize.