IT is heartening to note that improvements are being made in the distribution of help goods from abroad, even though the situation is still rather bad in this landlocked Himalayan country. Tents, tent material, food and water have been brought to the victims of the worst earthquake not only in Kathmandu Valley but also in Sindhupalchowk and other areas. Before the onslaught of the monsoon from June to September, thousands of people have to be brought under shelter.

Despite the assistance rendered from neighbouring and foreign countries for the people of Nepal who have lost their homes, flats and livelihood, families  and relatives, the fear remains that another quake may suddenly occur, and the victims will have to start anew after the losses have been estimated. Not only children are traumatised but also elderly people, and there's a lot to be done in terms of medical, psycho-social assistance. The questions that immediately arise are: why me? Why do we poor people have to suffer even more? 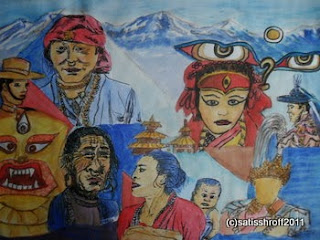 Nepal's fate is that it lies in a geologically unstable area where tectonic movements are common.The 2400km long Himalaya chains were formed after a collision of the Indian Subcontinent with the Eurasian landmass, and there is an annual movement of the subcontinent at the rate of 5cm to the north-east in the direction of Central Asia which, in turn, precipitates quakes like the ones in 1934, 1988 and 2015. Even though there was a major earthquake in 1934 and 1988, and geologists, both local and international, had warned about the possibility of such major tremors, nothing was done to combat the dangers of such a catastrophe. The houses mushrooming haphazardly around Kathmandu Valley show that the material used was unstable and of poor quality to withstand tremors in the category of 7,8 in the Richter scale.

Most of the houses in the hills of Nepal are a combination of hay and clay which are readily available to the hill farmers but offer no resistance to earthquakes and landslides during the rainy season. The cheap corrugated iron sheets aren't very stable and are prone to corrosion when they are drenched in the incessant rain. The farmers in the hilly regions cannot afford the cement that is sold in Kathmandu, Biratnagar and other towns near the Indian border, and transporting cement to the inaccessible mountainous areas is also another problem, where most of the argra-based and poverty stricken population lives.

The government of Nepal can invite tenders from contractors around the globe but who is going to pay the bill? What this land-locked mountainous country needs planning and management on a scale like the US Marshall Plan which was implemented after the World War II in Germany to help rebuild and strengthen the traumatised nation after the Nazi terror-regime, the many senseless war-fronts which caused world-misery and loss of human lives and the block-buster bombs of the Allied Powers. The quake struck Nepal unexpectedly with such a vehemence that the Nepalese government was paralysed, although experts had given warnings in the past years that it belonged to the endangered tectonic areas.

The decade long war between the maoists and the government troops-cum-police forces brought, aside from bloodshed, little progress for the people of Nepal. The royal family was ousted, the Narayanhiti Palace, designed by an American architect, has become a national museum, and what followed was a republican federal state but even today Kathmandu is very much centralised and good governance remains the unattained hope of the Nepalese people.

The country's politicians still cannot decide on the constitution, which just goes to show that it has become a debating and discussion society but as far decision-making and seeking compromise and solutions is concerned, it still lacks experience and the ability to implement decisions. The country is still archaic and medieval in many ways, and it is hoped that the young, educated generation will give this Himalayan country new and much-needed impetus towards democracy and progress. The traditional 'afnu-manchey and chakari-based ways of doing things in Nepal still goes marching on. Nepal needs time and assistance for a great many years to reach the 21st century. Afnuy manchey is the Nepalese equivalent of Vitamin B in western countries, and means to have support, acquire support from one's own people belonging to the same caste or ethnic group, and indicates a strong bond to ward of the rivalry on the part of the Bahuns, Chettris and Newars of Kathmandu Valley that have existed during the feudal since centuries till even today. The caste system was officialy abolished in 1963 in which the Hindu society was divided into four major groups, and those from the noutside groups or ethnic clans were denied participation in the social organisation of the caste or group. Even parallel societies existed and still exist within the Nepalese structure.

It is feared that fatalism, which is a belief in Nepalese Hindu society that you don't have any personal control over your life circumstances, and how your life is chartered in your astrological patro (scripture). The belief is strong that one's fate is determined by a divine agency in Heaven. For the Hindus it can be Bharma, Vishnu or Shiva. In the case of a natural calamity such as the recent earthquake, humans cannot be made responsible for the tectonic plate movement, as it is a geological phenomenon. However, most religious people believe in a divine determination and, as such, begin offering prayers and performing ritual offerings with the hope of appeasing the Gods and Goddesses in the Abode of the Snows: the Himalayas.

To the Hindus the mountains are holy and should be loved, adored and revered as sacred places as can be witnessed in the naming of the Himalayan peaks. Gauri Shankar is the personification of Shiva and his consort Parvati. Annapurna is another Goddess. Since centuries ascetics, sadhus, rishis and yogis have been seeking the solitude of the Himalayas to meditate under the protection of the Gods and Goddesses and Bodhisattvas. There is also the belief that the development of the universe is cyclical and occurs spontaneously, and that the present Age of Kali Yug is essentially bad and very negative incidents and calamities are pre-planned as part of a grande scheme. The Hindu expects the Gods and Goddesses manifest themselves by bringing about changes in this world. In the Hindu world you give charity to those in need as an altruistic gesture but when you look at it closely it is also helping oneself to improve one's karma by practicing this dharma of donating and helping other. In a sense, it is a matter of give-and-take.

In giving aid to Nepal in whatever form, it is advisable to deliver the goods to the reciepient, needy Nepalese directly as there is no effective governmental instrument to evaluate the country's needs, and to distribute this foreign aid.

Meanwhile, not only a catastrophe plan has to be developed and carried out, a new section of the government has to be created to take the responsibility and implementation when such a calamity hits the country in the not too distant future again. Along the Kali Gandaki river thousands of people are on the move due to a dam that has developed and the people fear that the dam will burst once the heavy monsoon commences, and landslides in the blue Mahabharat and Siwalik mountains will be a common annual feature, except that this time the earthquake has wrought more havoc, taking its share of human lives.