The Loss of Mental Metamorphosis & Other Poems (Satis Shroff)

Eight Indians on the run,

Fifty Neonazis behind them.

Roars from the throats of the Neos,

Beer in their blood,

Defiance in their sanguine eyes.

Adrenalin surges in the veins:

They just look on,

As the Jews were beated and transported,

The Indians run as fast

As their legs can carry them.

What follows is the bashing

Of the underdogs in the German society.

Of migrants who love Deutschland.

The colour of their complexion.

The police of Saxony's Mügeln come,

But are hesistant about the xenophobia

That was always there,

Even when the Stasi were in command.

Xenophobia that has broken out.

Said the Verfassungsschutz in 2006.

The ethnic Germans peer and look away

At the brutality and intolerance

Unfurling before their very eyes.

The teuro, the joblessness in the East

Has made them indifferent and complacent.

Give us more money to integrate the Neos,

Federalism and democracy is not inaction,

Where intolerance and racism rears its ugly head.

It happens from Mügeln to Mainz.

A mental metamorphosis is in demand.

Have we Germans learned from history?

Are striving for an European cultural identity,

Where foreign traditions and culture

Are the quintessence of togetherness,

The enclaves of intolerance should remain

Ghosts of the past.

Should be the order of the day.

Mental changes in our thinking processes,

Should be the cry of the day. They discuss about the asylum-seekers.

Peaceful, righteous Germans go In the streets with candles.

When a house burns in Mölln

They discuss about bringing back

Soldiers from the dangers of Somalia.

At the Turkish funeral in Solingen

The Chancellor keeps away

When the trial comes

Has a lot of hair.

He wears a two-piece suit,

Ties a tie around his neck

He peers into the cameras

With clear blue eyes and says:

"I'm innocent and a victim

Of the modern industrial society."

And withdraws his earlier statement.

The judges are lenient,

And the neo gets off on bail,

Gestures with his middle finger

And quips: "Leck mich am Arsch!"

As he speeds away in a car

Only to reappear with a Molotov

These are the slogans

The old black and white flag

From the Third Reich

At soccer stadiums, streets and pubs.

Stammtisch and in the streets

Says a drunk In broad daylight at the local Bahnhof.

Once asked me in Freiburg:

'How does it feel

To be a non-Teutonic In Germany?'

I boarded the last tram to Littenweiler.

I sat opposite a blond German

A short African, a Bantu in jeans

Came, stood and turned his back.

Covered with a cap and walkman,

Walked in with a sardonic laughter

Boisterous, obnoxious and high on alcohol.

The world was his stage.

He glared with his stone-blue eyes

At the African in the corner and said:

"This Boy is in the wrong place here.

Finish him off with a Kalashnikov Rat-tat-a-tat!

The proud German in Bermudas

Our Teutonic Hero was not in the psychiatric ward

But in a crowded public strassenbahn.

What had he poor African done?

Or was perhaps a scholarship-holder

At the invitation of the German government.

The tram was full

But not a sound of protest was heard.

Or was it angst?

The tram reached the Stadthalle

And the German became nastier.

Where was the civil courage of the Freiburger?

What was the use of wearing buttons:

What were silent protest marches

Worth the next day?

Why light candles to mourn a dead alien?

Akin to the horrid infernos

Of Hoyerswerda, Mölln and Solingen.

Every time I hold a fork and knife

At breakfast, lunch and dinner

I'm reminded of the shame of Solingen.

The loud-mouthed skinhead identified himself

With a wrong pride, pomp and glory.

A glory that cost 40 million lives

A spirit of plunder and murder

On helpless, disabled, gypsies and Jews.

The Jews have left for safer shores

And now the new-Jews are the foreigners.

As the tram reached the Lassberg Terminal

And uttered loud and clearly:

"I LOVE MY FATHERLAND!"

Not once, but thrice.

He went reeling to a waiting bus

A country where the dead have fear

Where the alien's agony and angst abides 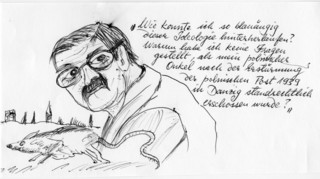 THE AGONY OF WAR (Satis Shroff)

Once upon a time there was a seventeen year old boy

Who lived in the Polish city of Danzig.

He was ordered to join the Waffen-SS,

Oh, what an honour for a seventeen year old,

Almost a privilege to join the Waffen-SS.

In the war to an abrupt end.

In the same evening,

He was brought to Meissen,

Where he came to know about his Vaterland’s defeat.

The war was lost long ago.

He realised how an ordinary soldier

Became helpless after being used as a tool in the war,

In the brutal reality of war.

It was a streak of luck,

And his inability to ride a bicycle,

That saved his skin

At the Russian-held village of Niederlausitz.

His comrades rode the bicycle,

And he was obliged to give them fire-support

His seven comrades and the officer

Were slain by the Russians.

The only survivor was a boy

He abandoned his light maschine-gun,

And left the house of the bicycle-seller,

Through the backyard garden

With its creaky gate.

What were the chances in the days of the Third Reich

To understand the world?

The BBC was a feindliche radio,

Was in full swing.

There was no time to reflect in those days.

Why did he wait till he was almost eighty?

Why did he torment his soul all these years?

Why didn’t he tell the bitter truth,

About his tragi-comical role in the war

Faithful till the end.

A boy who was seduced by the Waffen-SS.

The reality of the war brought

He felt the fear in his bones,

His eyes were opened at last.

Günter Grass is a figure,

You think you know well.

Yet he’s aloof and wary,

And you hardly know him,

He confides he has lived from page to page,

And from book to book.

Is he a Dr. Jekyll and Mr. Hyde? Doctor Faustus and Mephistopheles,

In the same breast?

Grass belongs to us,

For he has spent the time with us,

In these contemporary times.

It was his personal weakness

Not to tell earlier.

He’s a playwright, director and actor

Of his own creativeness and accord,

And tells his own tale.

It was his way of indirectly showing

What went inside him.

One layer after the other.