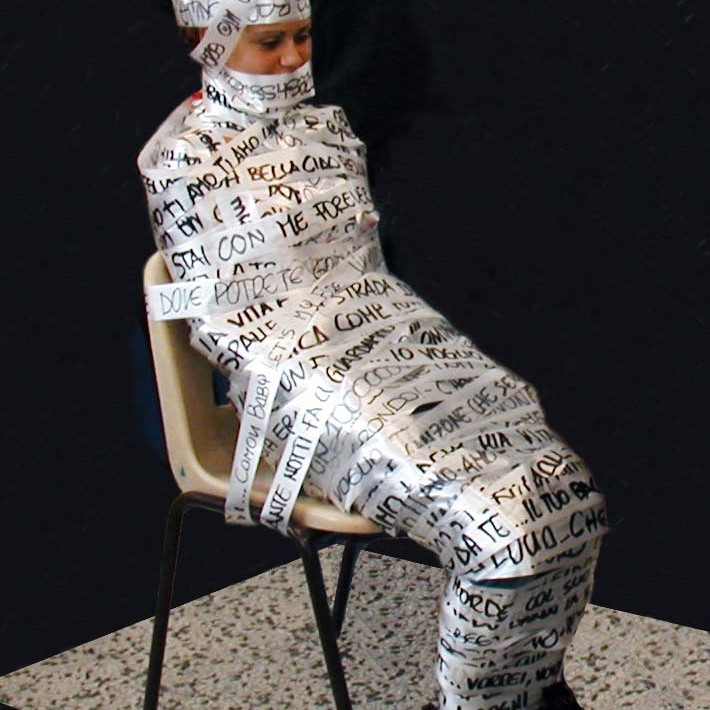 raffaella formenti has not received any gifts yet

Which of the following best describe you?
Professional Creative

How often are you the first among your friends to try something new?
Seldom

What do you want people to know most about you?
Raffaella Formenti (Brescia, ’55) - She took her degree
in ’89 at the Brera Academy of Milan and from then on
has had a constant exhibition presence. In 1993 she
made her first installation with packaging material and
Torre informatica that, placed on show in Trash: when
waste becomes art, along with other more recent works
is part of the ANS collection at MART of Rovereto. She is
present in publications (ie Meta, Tellus, Avanguardia),
and catalogues (ie Segnali Inquieti, immagini e percorsi
urbani europei dagli anni ’60 ad oggi, Ed.Peccolo, and
the recent La parola nell’arte, Ed.Skira for MART).

How did you hear about Brooklyn Art Project?
other ning network

A MOVE OF IDEAS
by Claudio Cerritelli

From “Torre informatica” (1993) to the disseminated and
crazy codes of “Digitale terrestre” (2005), to the more recent
“SPAM connection” (2008), the constructive interleaving
goes from that of stored up packing cases to the
explosion of interminable material.
And the contents doesn’t matter, what counts is the continuous
emanation of irrational experiences, impossible
to define. The advantage is that the sign-objects, taken
from the immense hyper-communicational system that
assails us, that are out to invade in every direction: they
don’t stop at upsetting the equilibrium of things but they
actually accentuate the same, leading the same to extreme
consequences.
In her multiple installations Raffaella Formenti uses different
strategies, first and foremost the dissemination of pixel-
objects (origami style tiny box-details cum paperyblendings
of printed colors); hence the misappropriation
of the places made available by the art exhibition circuits;
lastly, the objectual-dripping of fluxus root to interfere with
stereotypes and sheddings on the mechanisms of the
spectator’s attention.
In each and every occasion Formenti’s alchemic work
turns the mass of words and images that reawake from
the torpor of communication into pure verbal-visual vibrations
(explosive writings, echoes of materic mosaics,
chromatic photo-phantoms). It is a manual and imaginative
exercise that interrogates the world of senses triggering
off new inventive gestures in the provisory places
of art, invasive traces that rack the space-time of the memory.
Availing herself of all the contaminations of creation, of
verbal-visual ambivalence and all types of consumer
or informatic jargon, Formenti invents a creative routine
based on the need transfer her mental workshop of techniques,
modes, automatisms and obsessions from
one place to another.
In this way she plays with advertising slogans, with the
horizons of other people’s needs, she mixes icons of all
kinds with the maximum proliferation of messages. The
heterogeneous jumble of images ironically indicates the
function of art as a fast moving consumer product, to be
distributed everywhere to buyers of all tastes. But this distribution
exercise can never be programmed, it is often
tough to carry out, in fact the fragments shoot away without
any possibility of communication. To the point where
one might think of a move of ideas, a conceptual shift
of images, with the certainty of being everywhere one
might wish to go, with the maximum imaginative results
and the minimum operative effort.
for some years now Formenti has combined her dominant
passion for paperbased materials with scraps of
words and images picked up from files of virtual memory,
a sort of technological dècollage where the appropriation
of signs filed away daily can be decoded
into an infinite number of possibilities. In the speedy
time of the present, ones personal memory is traversed
by the collective memory, the way of traveling in the technological
web is visibly lightened with the offloading
of the weight of places and things. After years dedicated
to building superimpositions and grafts of trashobjet
trouvé as “art without the halo”, she has also accepted
with irony the challenge of the new technologies,
without betraying her desire to put the spectator within
the magma of her visual, tactile, odorous and even noisy
writings: all this within the totality of her becoming
and unbecoming. Raffaella Formenti does not forgo her
physical relationship with materials, he art is tactile
thought that acts against the mythologies of the immaterial,
even though at times originating from the tears in
her virtual skin.