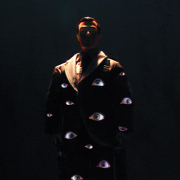 cayetano ferrandez has not received any gifts yet

Which of the following best describe you?
Photographer

What do you want people to know most about you?
The non-place is the limbo, for photographers who do not fall within the current fashion, which does not partake of genres, landscape, portrait, nude, journalism. I think not being, I'm not working as photographer with reality. Maybe just be the geek of the action figures ... but that, I think you have to judge you.

How did you hear about Brooklyn Art Project?
internet

“In its advanced, humorist forms, advertising has nothing to say, it laughs at itself: true advertising mocks advertising, as sense mocks nonsense, it has abandoned the area of truth, and this is its strength. Advertising has renounced, not without lucidity, pedagogy, the solemnity of meaning; the more discussion, the less attention: in the humorist code, the reality of the product is so much better highlighted by appearing before a background of improbability and of spectacular unrealities.”[1]
We live in a time of minimum effort and maximum expectation where the individual, disfigured and converted into the mass, we strive to meet the salvation precepts of consumption, properly expressed through advertising. Accustomed to the direct message of the gag, it seems that for most are less and less stimulated by the fact of going deeper into the realm of the formal, appearance becomes irrefutable truth, mutating into the sole global reality. Art, pushed into a corner of the media stage, has lost its share of audience influence, either through being seen as an aesthetic commercial object, devoid of discussion; or for containing conceptualisations that require reflexive participation. However, as Lipovetsky points out, advertising has abandoned any pretension to go further than the essential, permanently etching the brand name in the consumer’s memory, thus bringing the proliferation of simplified approaches and referential weakening within the industry.
Cayetano Ferrández in his video and photography work, to a certain extent appropriates the visual communication forms of advertising, he gives life to scenes that began from complete artificiality to, through dolls elevated to the status of interpretive models, develop micro-stories with characters that present an undertone of anguish that advertising will never use to stimulate our retinas. The very choice of repeated characters by the artist gives us signals of an incisive will to question the double role of individuality, which splits up the group while homogenizing it in the standards of a new culture that is infantilised but intended for adult consumption. One of his videos is a scene of a character converted into a human spinning top; after a long dance spiralling at the end of a chain, it remains inert. The work of Cayetano is composed of images with great symbolic weight inviting multiple reflections, able to evoke situations such as “the mass of citizens left defenceless by the loss of the protection of pensions, job security or public education; a loss which is not only increasing but is moving us into new forms of poverty which result in the paradoxical situation of underdevelopment in hyper-developed industrial countries. Thirty eight million people under the poverty line in the USA is an alarming figure in today’s economic paradise.”[2] They are the invisible contradictions of the great panoptico that administers and moderates the global image of our society, and in which the artist penetrates to give form to his personal metalanguage.
There are forms of expression, like poetry and art, that these days have particular communication difficulties because of the sentient impenetrability spread by the mass use of other communication formats, more trivial in terms of there content, more efficient in terms of their ultimate pretensions and obviously more dangerous in terms of the moral vacuum with which they are applied. The old fables have been substituted by new shining representations where the human figure is reduced to the indolent order of prophylaxis, supplying the moral sense of rejection of the different, even establishing the canons of fear towards thinking about the unforeseen, the incidental. To quote the words of Josep Güell,

" One day, life
will explode in their hands,
after that
never again
will remove the gloves"3]

Cayetano, Many Happy Returns and wishing you all the best on your Birthday, From Janey Godley