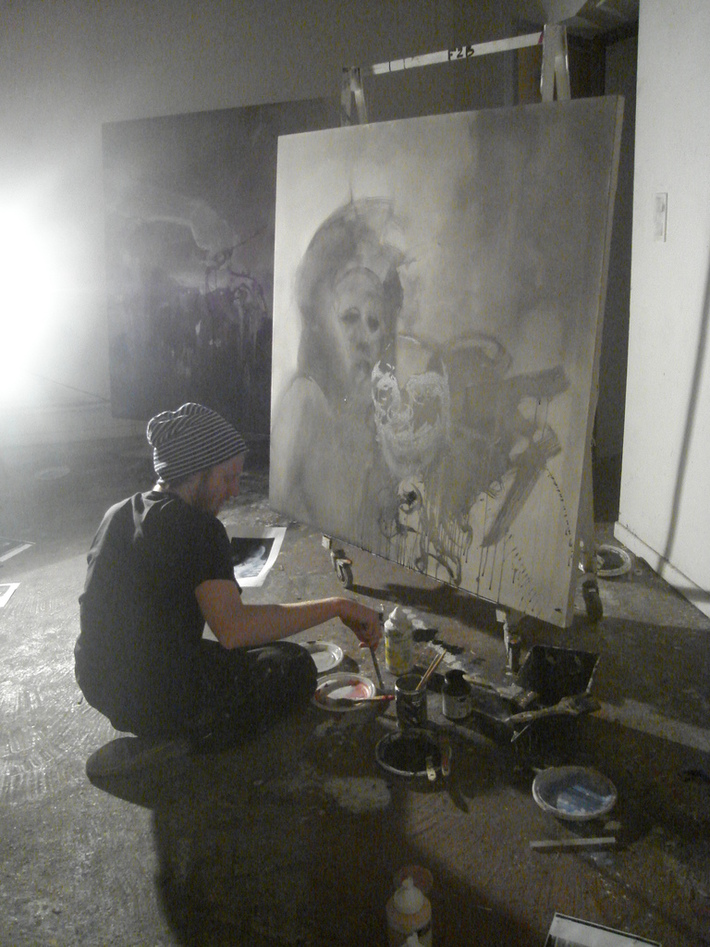 Max Boissard has not received any gifts yet

How did you hear about Brooklyn Art Project?
Internet

Maxime Boissard’s Painting do not hide his subjects, despite the spectral appearance his paintings gives to be collected, despite
the distance between what it works at the end, it will paint, such isolated and selected detail source, most often iconoraphic (film and photography, documentary or not, classical painting, modern or contemporary). Maxime B. always know a latent or underlying force lead the design of any real act. Though he is known, he also knows, at equal height of what he does not know that the strength of an image, first scattered throughout its apparent surface (a face, an attitude , mask, etc..) rise to be making it focuses «Adjustement non-apparent» (Heraclitus, 54 [Diels-Kranz]). In this way, Maxime B. extract from images some structures, plans composition, up to speak, but without any organic connotation of the clearance of a carcass.
As like a kind of finality, the stake was to paint that is persistent, however, will seek to lose, to remove or to delete. Links, echoes, for selected titles, but also the formats, mulling over processes are desire to paint, the paint itself. A first fuel, in short: it is recognized in the transfer of a portrait of American photographer Helen Levitt, the Vermeer’s Lacemaker, a geisha in Akira Kurosawa’s film, that we report between documentary photography’s Jacob Holdt and Agee’s prose, despite the different time between them, as much the process of his painting as that we look back in the reverse movement of its realization, its diffuse and evanescent  surfaces to the net steps behind it. But the process to accumulation of layers, overlays of diluted paint with excess, first deploy the logic of dispossession (of any profit) that Maxime B’s painting seeks to touch, or think. The only know of unknowing, is the act of dispossession, unpersonal intention of subject, the value of this approach is tied in a braid between a logic of dispossession and rigorous knowledge of images that Maxime.B has before him.
From this sum of knowledge, the act of painting led to search where the painting itself remain at the end. It is also one of the according reasons which Maxime. B can left a canvas in reserve for several months. From first traces of transfer, the reserves are revelated by successive passages through by very liquid paint, abandoned sometimes its vagaries, may gradually and literally overthrown. From a picture of Buster Keaton, for example, only remain the flowers he held in his hands, perhaps a bit of neck, painting is returning to himself, his framing, which is his «adjustment-non apparent».
Many other things are still to say about this painting, its relationship to German romanticism, its reflection on the sublime,
especially in upside mountains. No secret of his subjects, but letting them return to their basic structure, we think back to recall what Maxime B said about his passion for geology, where non-apparent forces are flush metamorphic rocks (so-called youth) of mountain peaks. This weave is still prevented the hierarchical bipartition between the non-visible and visible because only the path between the appearance of a drama, its expressive intensity (the wandering of a subject, any drift, the position of a lacking character), a liquid becoming that its paintings looking for consistency, counts as the training process. Maxime. B will said toevoking the representation of geishas in ancient Japan, anyone could understand that his paintings looked for «music that exists between their faces, their dress and decoration». From all reports, his painting comes to us also know that the distance of the reasons, something is watching us again …

hello, glad to meet you here...

DINGO BABUSCH said…
very nice ...i am feelin it...

Michael Hyder said…
I like what you do. I'll be looking for more....

india richer said…
Thanks, I've heard that before...not sure if it bothers me or not that people often connect my work with someone else's. I love him though.

Blissink Studios said…
yr work has a clarity of vision, seemingly random but insidiously precise in its effect on the senses. wonderful!

melvin levey said…
Hi Max great work really love it,thought nothing like mine,but then that might be the reason?.

Anthony // Brooklyn Art Project said…
Hi John, welcome to BAP. Great to have you here all the way from France. I LOVE your work. Great style, palette and mood. Looking forward to seeing more of your work. Feel free to contact me with any questions or just to say hey.