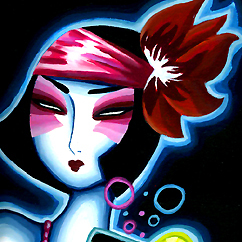 Which of the following best describe you?
Illustrator, Painter, Designer, Blogger, Art Enthusiast, Performance artist, Other

What do you want people to know most about you?
Fine Young Artist

How did you hear about Brooklyn Art Project?
friend

Free electron, self-taught artist, visual conceptor, Kaldea is passionnated by the image language, the symbol and code of pop and urban culture.Visual is a fascination.

From all this pop culture, she has created an univer whom with time, different meeting, and  miscellaneous inspiration has Moved into a self visual univer  with his own code, own story and own language. she get inspiration with what was, what is now, and what will be. her inspiration , she get it everyday, around her, each moment of her life is missed piece of the jigsaw of her art.

Kaldea wanted to create a new world, from her own kingdom, her mind, using her art. She is passionated by the pop and urban culture, but as well by the  anciant culture , the mythology, what was in the world of the human,before the industrial revolution, what will be in the world of the human in the future.
It's about, past, present and futur. This passion has been throught the japanese theater " kabuki"   because of the colors, because of the dramatic statement of the character, it's minimal and extravagant at the same time. It's has been a huge inspiration for her art, but not only.

she has integrate throught the year, and throught her own state of mind, some other details from different inspiration, from modern and actual inpiration to anciant culture inspiration, as the aztec, haida, or african culture.
And because she has never been in the classical way of art, my art have a bit of  manga twist, which it gave to my art that's unique style."

HAVE A HAPPY HOLIDAY, FESTIVE SEASON

Whatever you celebrate that floats your seasonal boat has a good one.

Oh and Batamology forgot about that one Red Ribbon
Kaldea, thank you for adding me as a friend, I hope you enjoy this site as much as I do. Also I hope you enjoy my Podcasts and Blogs… Best wishes Janey Godley
From the Gift Store

I am a stand-up comic and since I joined this network, I have found that this is a great site to share your Art, post your Blogs, upload clips, photos, joining Groups and Forums.

I hope you enjoy Brooklyn Art Project as much as I do.

The best way to keep up with my daily high jinkery is on Twitter: http://twitter.com/JaneyGodley