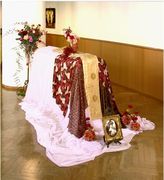 Yumi Morimoto was born in Osaka . She likes pictures, arts from her childhood. Since she became an adult, she lived in New York , London and Hong kong to study arts and decorations. Especially, she was deeply inspired by meeting beautiful ideas of funeral-decoration in London . She studied funeral-decoration with the big funeral company in U.K. After she came back to Japan , she invented new funeral-decoration which named “The Funeral-art®”. Funeral-decoration with using art to heal deceased and family of the deceased. The art casket works are mixed the beautiful ideas with oriental mind and western style, art urns, Art pet casket and the produce of funeral service. From 2005, The first exhibition of “The Funeral-art” started, since then exhibition in Tokyo , Kobe , London , New York every year. 2005, She got prize of Osaka at “Woman’s business idea contest” presents by Fuji-Sankei group. 2009, NHK, Kansai-TV broadcasted her documentary. Since she established “the Funeral-art”, many major Japanese newspapers introduced her art activity.