Yousuke Sasaki "ON THE DESK" 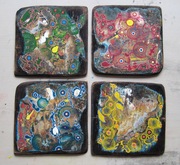 Yousuke Sasaki was born in Hokkaido, Japan in 1980.

He has liked drawing and painting since his childhood, but he had never studied art formally.
He attended the University of Tokushima, not to study art but psychology.
Fortunately, however, the university had an art course.
Thinking this was the last chance to study art, he took the course.
During the time, he had 2 solo exhibitions in Tokushima city in 2005 and 2006.

In 2007, a year after his graduation, he heard that there was an active art movement in Kamiyama-cho, Tokushima, and decided to visit there. Luckily, very kind people in Kamiyama found him a house and a job, and from that point, he has been living in Kamiyama and creating artwork.

In the same year, he had his third solo exhibition in Tokushima city.
The main work in the show included a A4 sized drawing which he had continued working on since he was in the university, a picture of imaginable creatures inspired by his daily life in Kamiyama-cho surrounded by full of nature, and small sculptures made from natural materials such as driftwoods and stones.

RSVP for Yousuke Sasaki "ON THE DESK" to add comments!