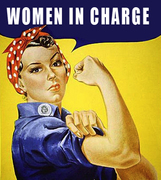 SOHO20 Chelsea Gallery is pleased to present Women in Charge!, an international group exhibition celebrating women’s leadership. Please join us for an opening reception with live performances on Thursday, July 18 from 6-8pm.

The economic, political, and social advance of women has been one of the most significant developments of the twentieth century. Women now account for 58.1% of the labor force (http://www.bls.gov/cps/wlf-databook-2012.pdf), and—as the Republican Party learned last November—it is no longer possible to win an election without women on your side: in the 2012 presidential election more women voted than men, and women who voted for President Obama made up nearly one-third of the electorate (http://www.americanprogress.org/issues/women/report/2012/12/12/47916/how-women-changed-the-outcome-of-the-election/). More than ever, women are out of the home and into the voting booth and the labor market.

However this record participation has failed to earn women the influence and recognition they deserve. From the business world, where only 4% of CEOs are women (http://www.huffingtonpost.com/2013/02/20/sexist-workplace_n_2718249.html), and women still earn 77 cents for every dollar a man earns, to Capitol Hill, where women’s majority at the ballot box does not stop an 82% male Congress from legislating their bodies, women are still denied power.

The art world is similarly plagued by rampant sexism. In February, a portrait by Berthe Morisot was sold at $10.9M, setting the all-time record for artwork by a woman.  The record for men: Cezanne’s “Card Players” at $259M.  As defined by “awards, exhibition opportunities, critical reviews, museum shows, and price points,” male artists are three times more successful than their female counterparts (http://www.artcritical.com/2013/02/26/rema-hort-mann-foundation/#sthash.qEYmuwwb.dpuf). Nearly one hundred years after women won the right to vote, and fifty years after the second wave feminist revolution began, women’s work is undervalued, women’s choices are invalidated, and women’s voices are unheard.

It is time for women to invest in each other— to celebrate our accomplishments and affirm our potential. In addition to creating a space to discuss the pervasive influence of sexism in all spheres of American life, Women in Charge! seeks to honor women: our work, our role models, and our lives. In this exhibition, artists of all genders, across generations, and working in a variety of media use the language of art to explore the relationship between women and leadership: a visual representation to women’s ever growing power.

For information on participating artists please visit our website at

RSVP for Women in Charge! An open exhibition addressing leadership. to add comments!