The TORSO Corporation: Broadcasting From the Alternative Present

TORSO Corporation executives Jesse Corinella and Jan Dickey will lead a discussion on their “Broadcast Capacitor” installation piece. The broadcast capacitor is a television set transmitting a series of video broadcasts from an alternate present in which a global disaster has eliminated all human life aside from generations born 1985 and on, successfully restarting civilization: fresh and right smack in the middle of the 1980s.

The broadcasts, collectively titled Broadcast 6, use a collection of stock footage from the 1930s–1970s along with digital and super-8 film shot by the TORSO corp from 2006–2010. Broadcast 6 tells a story, through the veil of science fiction, that questions the American values established in the twentieth century and, through point–counterpoint competing broadcasters, opens a discussion on how those values are relevant today.

RSVP for The TORSO Corporation: Broadcasting From the Alternative Present to add comments! 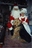