Nicholas Galanin: The Value of Sharpness 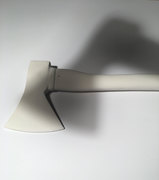 Nicholas Galanin presents "The Value of Sharpness: When It Falls," a site-specific installation at Open Source Gallery.

Nicholas Galanin’s offers perspective rooted in connection to land and an engagement with contemporary culture. For over a decade, Galanin has been embedding incisive observation into his work, investigating and expanding intersections of culture and concept in form, image and sound. For "The Value of Sharpness: When It Falls," Galanin has created sixty porcelain hatchets, which are suspended from the gallery ceiling.

Hatchets are an iconic example of Indigenous tool making and technology throughout the world; their weight and sharpness wielded in attack or defense, and in daily activities of creation and subsistence. Regardless of the force and skill with which these hatchets are directed, their porcelain clay bodies will break on impact. Patterned with the red and blue floral of delftware, these hatchets reference and reflect the legacy of colonial impact on Indigenous communities; they are fragile, decorative representations of powerful tools. These objects speak to the restriction of Indigenous sovereignty through colonial/settler violence and legislation tolerant of only fragile and decorative representations of Indigenous people. Simultaneously the blade of each hatchet is lined with gold luster. At first glance another apparently decorative motif; this line of gold is also a reminder of the value in sharpness, of Indigenous technology, and the capacity to create and destroy. The capability of the hatchets is not in their ability to split wood or bone, but in their ability to shatter, creating small sharp projectiles and edges from decorative representations.

Nicholas Galanin (b. 1979) is a Tlingit/Unangax̂ multi-disciplinary artist. Galanin apprenticed with master carvers and jewelers, earned his BFA at London Guildhall University in Jewelry Design, and his MFA in Indigenous Visual Arts at Massey University in New Zealand. His work has been exhibited at the Heard Museum (AZ), Anchorage Museum (AK), Trench Contemporary (Vancouver, Canada), National Museum of the American Indian (NY), Sante Fe Art Institute (NM), and the Nevada Art Museum (NV) among many others. He lives and works with his family in Sitka, Alaska.

RSVP for Nicholas Galanin: The Value of Sharpness to add comments!