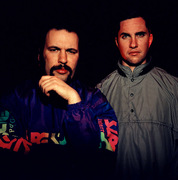 On October 31st, from 8-12PM, Lucky Gallery is hosting a closing reception for “Nighttime is for Dreaming”, a Halloween celebration under the lights with special guests, Big Digits, a rap/danceattack/computerkiller project based in Cambridge, MA.

“Nighttime is for Dreaming” a collaborative installation of light, sound, imagery and text, from New York artists’ Christoper Coggiano and Alix Sorrell and New Jersey based artists’ Ralph Maratta and “War of the Lightning Bugs”.

Big Digits consistently play shows in and around the Boston area, varying in venues from basements, to arenas, to art galleries, and college dorms. They have also toured across North America several times; being met with both enthusiastic acclaim and swarms of this continent’s dancing sweaty youth. While keeping the original spirit of rap music nearby, they explore the possibilities and avenues of a genre without heed to the dogma or orthodoxy of any style of music.

Big Digits has been described in variety of ways from: “art rap nonsense” (The Village Voice) to “twisted genius” (The Northeast Performer) to “You guys dress like mummies and hit drums and dance, that shit’s awesome” (some dude on the street), they kind of all fit.

Libations will be provided and special treats to those that are in costume. “Nighttime is for Dreaming” but it is also for dancing.