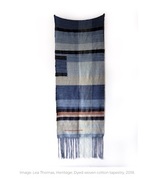 Trestle Gallery is proud to present the work of Lea Thomas in CURRENTS, a solo exhibition curated by Jennifer Simmons of DOPPELGÄNGER PROJECTS.

Lea Thomas is a New York-based fiber artist and musician. Originally from Maui, Hawaii, Lea’s work reflects on her unique perspective of the relationship between person and place. Informed by both academic and self-directed study in botanical sciences and traditional folk herbalism, Lea uses organic fibers and plant-based dyes to create weavings that celebrate the intelligence of the natural world.

Specifically, Lea’s frequent use of indigo pigment is symbolic of her Japanese heritage, honoring a lineage of kimono makers and textile artisans in her immediate ancestry. Lea was an artist in residence at the Montello Foundation in Nevada in 2018.

JENNIFER G. SIMMONS is an independent curator, writer, and researcher based in Ridgewood, Queens. She is Cofounder and Curator of Doppelgänger Projects, an independent curatorial venture promoting distinctly alternative perspectives while focusing on practices of aesthetics, feminism, technology, and the metaphysical within the emerging contemporary art landscape. Her most recent exhibition, STELLA, presented an immersive installation in a vacant prewar apartment predicated on the passage of memory, identity, and time. Previously, she was Assistant Curator + Art Advisor for g a macura inc., during which she managed GE's corporate collection and archive of over 3500+ works. Jennifer holds her M.S. in Arts Administration from Boston University, where she received the 2012 award for Excellence in Graduate Study, and obtained her B.A. from New York University in both Art History and Middle Eastern & Islamic Studies.