Chris Domenick: You are Apple/Pear 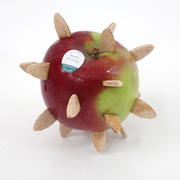 Chris Domenick: You are Apple/Pear

On November 4, Chris Domenick will begin work on You are Apple/Pear as part of Recess’s signature program, Session. Session invites artists to use Recess’s public space as studio, exhibition venue and grounds for experimentation.

Over the course of his Session, Domenick will explore the historical genre of the still life and its accompanying fruit basket. The fruit basket’s political implications of ownership and display and its significance in the history of Modernism have physically transformed into a smoothie: a singular metaphor for multiplicity. Domenick will investigate how objects are constantly negotiating their component parts.

Domenick will collect objects that reflect the surrounding local economy of Soho. He will explore the various possibilities of how to combine the collected objects and will utilize linguistic devices (metaphor, metonymy, and synecdoche) to playfully rewrite their histories. Through this process, he will address the shifting subjectivity of objects and the resulting impact on the construction of identity. He will ask how inanimate objects enable human subjects to transform themselves, and survey the consequences of this shift.

The apple is: a container for meaning, a complex web of disparate points, a symbol of evil, a historical corruption, a curious tween, the viewer.

Recess’s space will operate as an interstitial workspace between private studio, photo booth for objects, and public exhibition space. Three customized commercial photography still life tables will be used in the space as sculptural tableaus and sites for ever-changing still life set-ups. In addition to the tables there will be a constructed kitchen island in the center of the space where a blender will be stationed and utilized throughout the Session.

About the Artist:
Chris Domenick is a visual artist who currently lives and works in Queens, NY. He received a BFA from Tyler School of Art and MFA from Hunter College. He is the recipient of the C-12 Award (judges included Stefan Kalmár, Chrissie Iles, and Johanna Burton) from Hunter College in 2013. He participated in the Skowhegan School of Painting and Sculpture in 2012 and has been included in exhibitions at Room East, Socrates Sculpture Park, Vox Populi, White Box, Louis B James, The Center for Experimental Lectures, The Queens Museum of Art, Capricious Space, and MassMOCA.

RSVP for Chris Domenick: You are Apple/Pear to add comments!