Ann Young: In A Dangerous Time 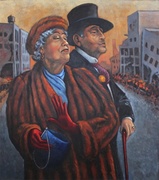 In A Dangerous Time

SOHO20 Chelsea Gallery presents In A Dangerous Time, new paintings by Ann Young, on view through October 26th.  This exhibition features large figurative works on canvas as well as small works from the Resurrection series; abstractions of leaves in oil on canvas.

In Young’s new work she examines the discord apparent in todays’ social and political economies and the potential for coming generations to right the course of humanity.  While a critique on contemporary culture, Young looks at numerous aspects from climate change and the financial inequities to random acts of violence.  Her symbolically stylized paintings interject the possibility for children to act as a force of compassion, change and hope for the greater good.  As seen in “They Passed With Their Noses In The Air” Young points to canonized forms of social representation, in this case a 1930’s Metropolitan era scene of a well-dressed older couple about town.   The caricatures described in the painting relate to the present day economic turmoil, such as the ever-widening disparity between the rich and poor classes in the United States.  This is just one of many “hot-button” topics Young address in the exhibition.  From the role of the military, patriotism and gun control, these confrontational works cover myriad problems facing societies today.

Within the exhibition are small works on canvas from the Resurrection series depicting leaves in various stages of their natural cycle, which imply a sense of decay and regeneration.  Even among the weight of the content of her work, Young’s vibrant color and stylized figures convey a sense of hope and possibility.  Her work emphasizes nature as a greater force than humanity that acts as both a comfort and reality check.

Ann Young spent her early years in Chicago and on the Great Plains of Nebraska.  She received a B.F.A. in ceramics from Rhode Island School Of Design and has exhibited widely throughout Vermont and New Hampshire.  Young enjoyed a long and successful career in ceramic production followed by woodcarving and was known for her large-scale sculptural installations throughout the 1980’s and 90’s. Young began figurative painting in 2001.  This is her first exhibition at SOHO20 Chelsea Gallery.

For more information please contact the gallery at 212-367-8994 or info@soho20gallery.com

RSVP for Ann Young: In A Dangerous Time to add comments!